The Met explores the art of rock ‘n’ roll

An exuberant rock ‘n’ roll exhibit by the Metropolitan Museum of Art captures the essence of the genre and all that it personifies. 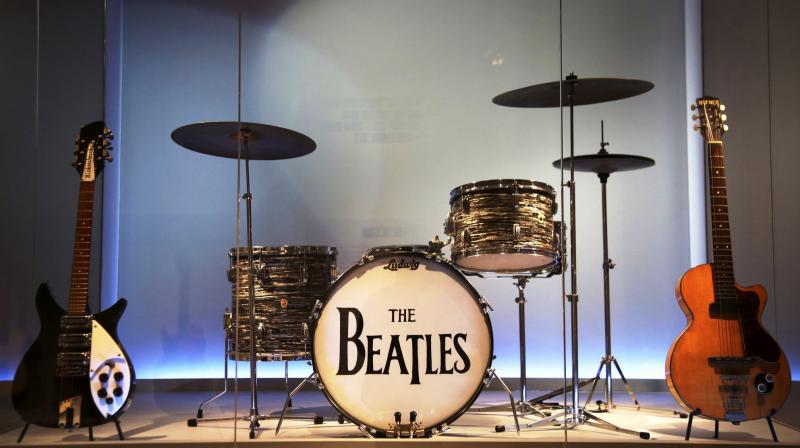 Instruments used by members of The Beatles at display at the exhibit "Play It Loud: Instruments of Rock & Roll" at the Metropolitan Museum of Art in New York. (Photo: AP)

New York: Museum exhibits tend to be quiet. Not this one. In ‘Play It Loud,’ an exuberant show that can be heard as well as seen, the Metropolitan Museum of Art takes on the history of rock ‘n’ roll through iconic instruments on loan from some of rock’s biggest names.

There are flamboyant costumes worn by Prince and Jimmy Page, videotaped interviews with ‘guitar gods,’ even shattered guitars. The show runs here from April 8 through Oct 1 before travelling to the Rock and Roll Hall of Fame, in Cleveland, where it will be on view from Nov 20, 2019 through Sept 13, 2020.

“We’re looking at rock ‘n’ roll instruments as an art. They serve as muses, tools and visual icons and many of them are hand-painted and lovingly designed,” says Jayson Kerr Dobney, curator in charge of the department of musical instruments at the Met. He organised ‘Play It Loud: Instruments of Rock and Roll,’ with Craig J Inciardi, curator and director of acquisitions at the Rock and Roll Hall of Fame.

For anyone who ever dreamed of climbing onstage at a rock concert for a closer look, this may be your best shot. “Instruments are some of the most personal objects connected to musicians, but as audience members we are primarily used to seeing them from far away, up on a stage in performance. This exhibition will provide a rare opportunity to examine some of rock ‘n’ roll’s most iconic objects up close,” says Dobney. 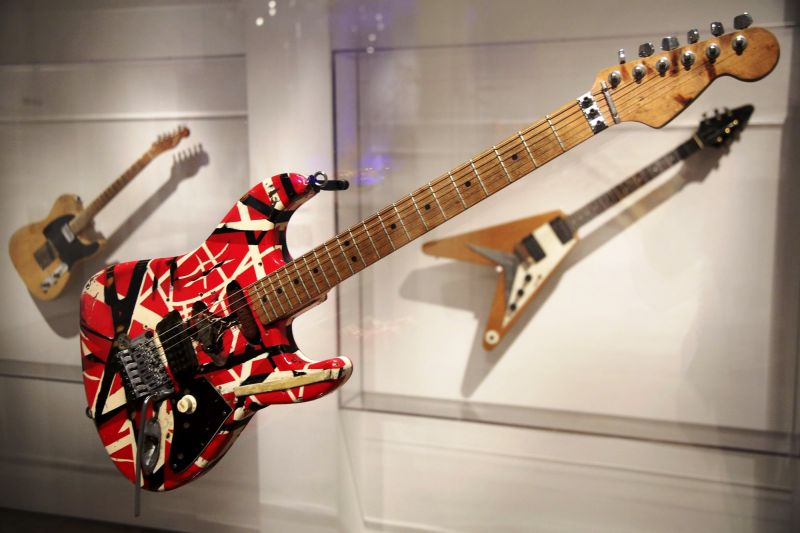 A guitar made and played by Eddie Van Halen of Van Halen is displayed at the exhibit. (Photo: AP)

Highlights include Chuck Berry’s ES-350T guitar (at the entrance to the exhibit), John Lennon’s 12-string Rickenbacker 325, an electric 500/1 ‘violin’ bass on loan from Paul McCartney, Keith Moon’s drum set and the white Stratocaster played at Woodstock by Jimi Hendrix.

Interviewed by The Associated Press on Monday, Page, the guitarist and founder of Led Zeppelin, said that when curators approached him and explained their vision of the exhibit, you approach it through the Greco-Roman art galleries and then suddenly come upon Berry’s guitar, he was all in.

“My guitar was confiscated if I took it to the school field to play,” he says. “That’s the kind of respect given to guitars in those days. “So to see guitars from people I listen to, it’s absolutely phenomenal. It’s humbling,” he added.

Over 130 instruments are featured in the show, including ones played and beloved by the Beatles, Elvis Presley, Bruce Springsteen, The Rolling Stones, The Grateful Dead, Lady Gaga, Joan Jett, Metallica, Steve Miller, Page and other rock ‘n’ roll greats.

The collection spans from 1939 to 2017. All the instruments are on loan, most by the musicians themselves, although Miller has promised to donate to the Met his 1961 Les Paul TV Special guitar, painted by surfboard artist Bob Cantrell. The show features its own rock ‘n’ roll soundtrack and is organised in thematic sections. 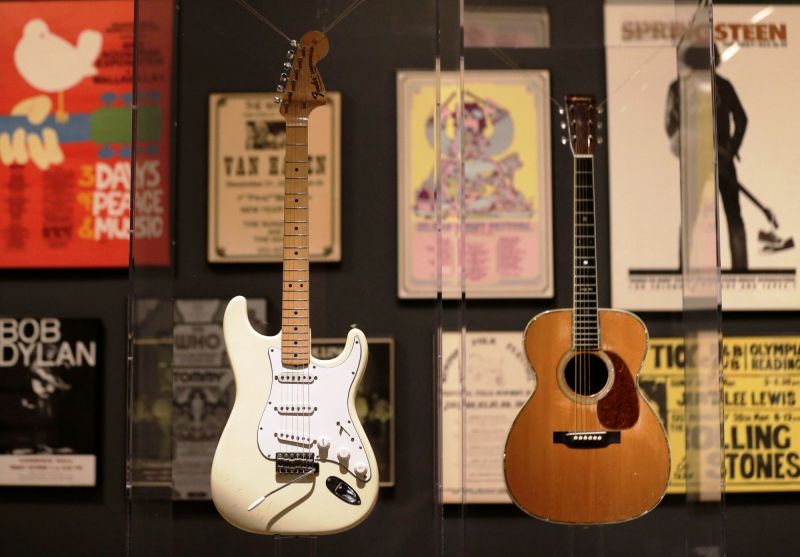 Guitars used by Jimi Hendrix (L) and Eric Clapton are displayed with concert posters at the exhibit. (Photo: AP)

‘Setting the Stage’ explores rock’s early days in the American South of the late 1940s and early 1950s, when pianos, saxophones and acoustic guitars were among the instruments of choice. Soon, Berry helped revolutionise the sound, establishing the electric guitar as the genre’s primary voice and visual icon.

Also featured is a setup like that used by the Beatles on ‘The Ed Sullivan Show’ in 1964. After that performance, “thousands of rock bands were formed using that same lineup of two guitars, a bass and a drum set,” says Dobney. ‘The Rhythm Section’ explores the sources of the genre’s powerful rhythms, with accented backbeats created using a drum set and electric bass guitar.

The ‘Guitar Gods’ section traces that phrase to Eric Clapton’s stardom and a piece of 1966 graffiti in London proclaiming, “Clapton is God.” Others dubbed guitar gods included Page, Jeff Beck, Pete Townsend and Hendrix. All exemplified virtuoso musicianship and awe-inspiring swagger. By the 1970s, women, too, were fronting bands and finding platforms for their own personae and skills, Dobney says.

Even as guitars were lovingly painted and sometimes even built by the musicians who played them (like Eddie Van Halen’s red and white “Frankenstein” guitar, featuring a Fender-style body and neck with Gibson electronics), instruments were also famously destroyed by rock stars as part of their act.

“It may be the only musical genre where destruction of instruments became a part of the performance,” Dobney says. Featured is a fragment of a Hendrix guitar that he set on fire and smashed onstage at the Monterey Pop Festival in 1967 and a Gibson SG Special guitar destroyed by Townsend during a photo shoot with Annie Leibovitz for Rolling Stone (and preserved in Lucite).

‘Expanding the Band’ explores the way the classic four-piece rock band was augmented by instruments like dulcimers, sitars and a range of experimental keyboards to expand the sound. ‘Creating an Image’ opens with an enormous, jagged electric piano housed in acrylic with built-in lights, owned by Lady Gaga. That section also includes Prince’s “Love Symbol” guitar and a dragon-embroidered outfit once worn by Page.

A wall image of Springsteen taken from behind with his guitar over his shoulder illustrates how for some stars, the guitar became almost an extension of their body. ‘Creating a Sound’ explores the technical side of rock music, with the amps, guitars and rigs used by Page, Keith Richards, Van Halen and Tom Morello.

Each of the four rigs is accompanied by a videotaped interview with the artist explaining how they created their unique sound. The show ends with footage of some of rock’s most iconic moments, along with decades of posters advertising groundbreaking concerts.