Are we a nation of vandals?

This strange instinct that wants to deface beauty, and finding no outlet for the inherent violence wants to get even by misdirecting its anger. 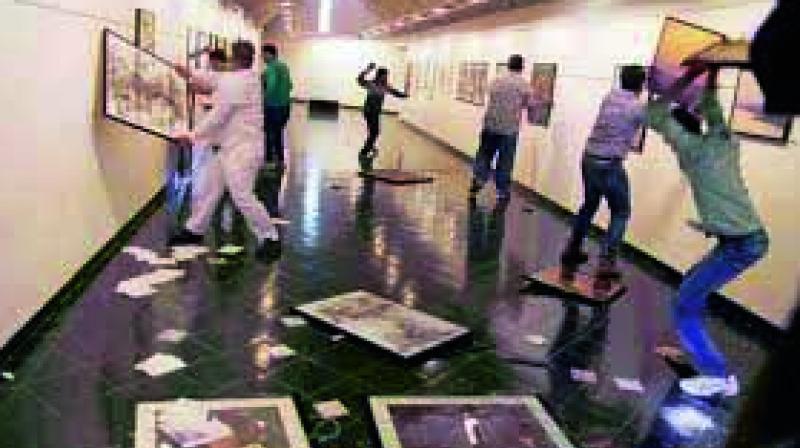 People vandalise artworks at a gallery.

I am deeply pained to say that we are a nation of vandals. We will vandalise anything from the new to the old, beautiful to the ugly, the public to the private, precious to the seemingly inexpensive. The trigger point of this thought process is the recent defacing of Balbir Singh Katt’s sculpture at the Mandi House roundabout. Some vandal has painted and sprayed the marble abstract sculpture in hues of bright sky blue and yellow. And he even had the disgusting gumption to autograph his name on his act of vandalism. Going by the lowgrade quality of his “art”, he was not even a failed graffiti artist. So it was not as if he wanted to share his great artistic capabilities with the rest of the world. He was just a pure vandal. And this is just a case in point.

Is it mere civic sense that we lack, or is it our way of showing protest and anger? This strange instinct that wants to deface beauty, and finding no outlet for the inherent violence wants to get even by misdirecting its anger. Why doesn’t it occur to us that after all we have paid for it via some or the other tax? Just because we have not paid for it directly doesn’t make its ownership any less real or our stake in it any less. I would go so far to say that it is a strange psyche that throws acid on women and runs away. It is the same lumpen psyche that forms a mob. It is the same mindset that after studying a few classes doesn’t want to work as a farmer. And these small or big acts of vandalism are nothing but seething anger inside.

There are umpteen other examples when artworks in the public arena have been defaced mercilessly. One particular image of an artwork in the posh Connaught Place area that I am unable to shake off from my head is the large sized sculpture of public art — a pair of huge spectacles made of fibre glass vandalised overnight the very day it was placed. This happened when we make our public spaces almost vandal-proof by using non-fragile materials like steel, bronze, fibreglass, stone, etc. In no other civilized country have I seen such tough materials used, and yet we still find a way of vandalising our art works in public spaces. Just to illustrate a point — there are so many street benches in England that are marked by a small plaque saying that some famous personality used to sit there often or it was their favourite bench. And that plaque remains there and so does the bench. Can you imagine it happening in India? Plaque or bench or both would have disappeared overnight! There are innumerable instances when flow
ering plants are taken away from roadside along with the pots even from high-security Lutyen’s Delhi. In our country, we don’t even leave basic iron manhole covers, let alone things of historical importance. Imagine if our vandals went to Paris, what a field day they would have of finding so much iron lattice around each tree for the water to percolate to the roots. That they are imperative for the tree’s survival or aesthetic in their own right will not even occur to them. Even if I say it in humour, I find it extremely sad to say that we have no sense of the public or pride in the collective. Go to any monument. From Pathak ji advertising his matrimonial service to some brand selling underwear to lovers carving names — you can see them everywhere. One can see them at spaces never imagined — like the ghumbads of Mughal monuments. The more inaccessible the place the more certain you can be that some fellow would find it challenging enough to risk his life and limb to find a way of clambering on top to write ‘
Sweety Loves Pappi’! Even trees are not spared from the vandals. Names of lovers, nails driven to hang advertising boards, or vendors sitting under them using tree as their makeshift shops, our trees have seen it all.

The shining new trains from Mumbai to Goa, the Tejas Express, or the Mahamana Express from New Delhi to Varanasi were vandalised beyond recognition. The trains returned dirty with bottles and garbage strewn all over, with television screens gouged out, bathroom fittings pulled out mercilessly, windows smashed, seats and curtains ripped as if herds of animals had trampled over them. It was so disgusting that I consider it a matter of national shame.

But the same people indulge in completely different behaviour when it comes to anything that has a religious angle. I must share my own experience that has been tried and tested several times in India. I live in a fairly posh area of south Delhi in a building that has separate floors owned by different people. I was fed up of telling the entire building domestic staff not to touch the stairwell walls or spew ‘paan’ or ‘gutka’. So next time before the whitewash, I got tiles of Gods and Goddesses embedded at regular intervals on the walls. The result was magic. Even after two years, my staircase doesn’t need a whitewash!

The same way we stay away from defacing even a stone that has the remotest hint of a religious angle to it. Environmentalists have used this ploy to great effect when trying to save trees! But then it has other fallouts too. There have been innumerable cases where encroachers have used it to round up prime space for their use even in the middle of the road. That the ingenious Indian mind will find newer ways to beat the system is a given. But I think it needs to be instilled that these works of art or facilities are owned by us and we have paid for them indirectly needs to be ingrained into us so much that it becomes second nature. I strongly feel that this should be dovetailed into the various Swachch Bharat programmes.

Dr Alka Raghuvanshi is an art writer, curator and artist, and can be contacted on alkaraghuvanshi@yahoo.com