The horse as a metaphor for freedom

Husain’s horses need no introduction. I once asked him what the horse stood for, and he had unhesitatingly replied: Grace and freedom. 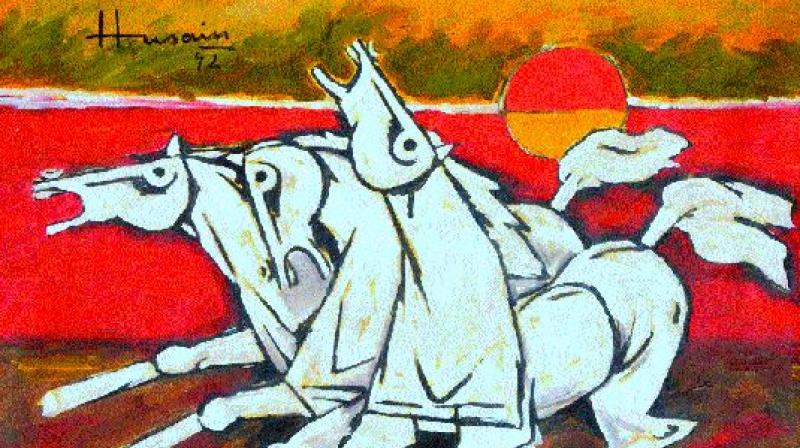 So many people have such fond memories of him as a person, as an artist, as a friend and for the art world as the true game changer that he was.

Last week a few artist friends dropped by to meet me and conversation veered towards the subjects artists tend to choose for their paintings and how their artistic phases can be marked by those subjects. The more we discussed, the wider the spectrum got. It was fascinating. One of the more obvious artists who was bound to feature was MF Husain and his  fascination with horses. He drew horses in practically every phase and every medium.

I remember how Husain actually painted a live horse in the middle of Connaught Place in the early 90s at an art opening. I once asked him what the horse stood for and he had unhesitatingly replied: Grace and freedom. To my mind the horse was a metaphor for freedom for him and he craved to be so free himself that he didn’t want to be shackled by anything. Not even time or date. When we set up an interview for my book, one could never be sure if Husain would land up on that date, forget time! He also fed this unpredictability aspect to the hilt. I remember he was to inaugurate something in Delhi and while everyone was waiting for him, on that date he was in Bangalore!

When I see artists prepare for months a years for a show I often cite his example. If he was to have a show in any city, his standard operating procedure used to be land up four to five days before, go to the best store selling paints and canvas, buy up practically everything in sight, lock himself in the hotel suite, set up the canvases on easels almost cheek by jowl and paint away. By the time it was showtime, the works were ready. I have seen this miraculous way of functioning and it was like seeing magic unfold. The sureness of his strokes, the way colour was applied, the comfort and ease with which he chose his colours was beyond compare. 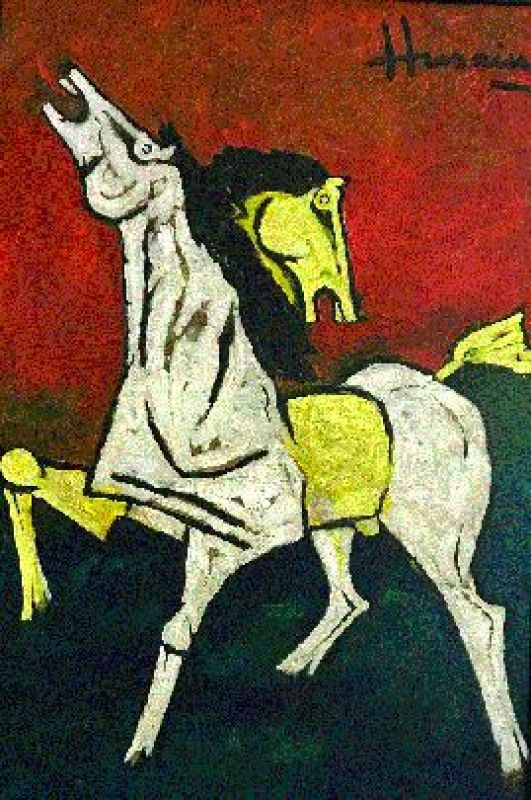 I was in college in the late 70s when he was painting the ceiling mural of the erstwhile Kanishka Hotel lobby. The hotel was yet to be fully commissioned, and since we lived opposite the place, we would go there for coffee sometimes. On one such occasion I watched mesmerised as Husain had set up the easels and was painting with mercurial speed as if painting on several canvases at the same time. It was even more fascinating as the canvases were not of even shapes.

The style of functioning remained even till 2005 when I had gone to meet him with the first-born Shamshad, the entire suite was filled with canvases in various stages of completion. I will never forget that afternoon when poor Shamshad was reduced to feeling like a teenager in front of his father and it was his father who won the day with his charm, wit, humour and erudition, despite no formal education in some fashionable university – he learnt at the altar of life. He was an astute and generous man. So many people have such fond memories of him as a person, as an artist, as a friend and for the art world as the true game changer that he was. Never did he ever bad mouth other artists unlike some of his peers. It is one of the reasons that he lives even in death and his detractors are forgotten even if they are alive. But sometimes nostalgia is good for you. It puts into perspective many things!

Taking of game changers, I hope the market will lead to the arts coming into a happier position – as art is the last thing people invest in when they have bought their real estate and jewels and cars and other expensive toys. Patronage is needed to support the arts for they are our heritage and repositories of culture. Both visual and performing artists and artistes need to be given a better economic deal that gives them the freedom to create without having to worry where their next meal was going to come from. Art is a very erratic pay master, schemes must be launched to bring more artists within its ambit – after all, if assured work can be provided at the rural level for development, why not for artists, artistes and artisans?

To my mind the government definitely needs to explore the possibility of taking a fresh look at arts management and create an arts cadre that will help run the several thousand arts institutions in the country. Introducing professional courses in institutes like IIM could be the first step to market the arts better towards the end of making the arts self sufficient. Steps need to be taken urgently to undo the damage wreaked by unscrupulous art galleries. In their race to extract their profits they raised the prices of art to unsustainable levels, leaving many artists in the country in pitiable conditions.