Life   Art  02 May 2019  When Tamil became the voice of the heart in the Spring Festival of Music & Dance at IIC
Life, Art

The Tillana brought in the spirit of pure joy, with the Mangalam based on Saint Thirunavukkarasar, set in Ragam Surutti. 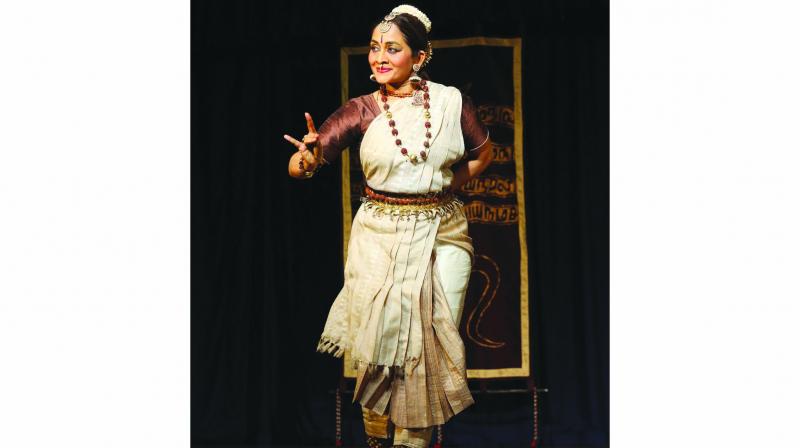 It was the annual Spring Festival of Music and Dance at the India International Centre (IIC), New Delhi, and instead of the perennial theme of Spring, it was “Sivamum Tamizhum’’ where ardent love and devotion for Shiva expressed in the language of Tamizh (Tamil) formed the central inspiration for Chennai-based Uma Ramesh for her Bharatanatyam weave comprising the first half of the evening. Trained under many gurus — Govindarajan, Kanaka Srinivasan, Nitya Kalyani (for a short period) and now C.V. Chandrasekhar and Braga Bessel — Uma’s Bharatanatyam has absorbed strains of the Vazhuvur and the Kalakshetra/Pandanallur schools along with abhinaya under specialists, without losing out on the right line and profile of the dance. The recital was a blend of specially composed items, framed with lyrics from the orthodox repertoire of Bharatanatyam also — the entirety involving resource scholar Dr Rama Kausalya, music direction and rhythmic inputs by Nattuvanar K.S. Balakrishnan, crucial inputs from G. Vijayaraghavan, the Mridangam expert and abhinaya expertise provided by Bragha Bessel. An edited version of what was originally created to fit into this time slot, the thematic concerns of the performance were indicated right from the prayer song set to music and rhythm by K.S. Balakrishnan, “Vidai Ugaithavan” in raga Arabhi and talam Adi, the song invoking the blessings of Lord Shiva seated on his mount Nandi the bull while also paying tribute to the language of Tamizh(Tamil). Shiva the primordial Guru, the story goes, after imparting Sanskrit learning to Paanini, opened the eyes of Sage Agastiyar to the grandeur of Tamizh. Coming from such an exalted source, it was but inevitable that Tamizh become the pride of Pandiya Nadu.

The elegantly turned out dancer’s entry was with a traditional Mallari, a legacy from the temple tradition of the dance, in raga Gambheera Nattai, set to Adi talam, interspersed with the Tamil poetry of Karaikkal Ammaiyar, the only woman composer among the Nayanmar and the first to sing in the poetic format called the “Padhigam”. The words of the hymn set to ragam Kalyani by Nattuvanar Balakrishnan “Thutham kaikillai vilai thaaram uzhal ili osm pan kizhamappadi” describe the Lord of Thiru — Alangadu performing his eternal dance to the accompaniment of old instruments (then in mode) like Thuttam, Kaikillai, Vilari, Tharam, Uzhal, Ili, Sacchari, Kokkarai, dundubi, thalam, veenai, maddalam. The dance visualisation along with the nritta element in the Mallari, in neatly held postures contained the typical imagery associated with a Shiva temple — sunrise with a lotus blooming in the pond, the outer prakara wall, the inevitable idols of Vinayaka, Muruga, the Dhwajastambha at the entrance, the seated Nandi, the Yali (vyala) Sentinels, and the inner prakara with the deity being taken in procession and finally the sanctum sanctorum.

The centerpiece of the recital, the Varnam was written and its rhythmic Jathi or teermanam links composed by G. Vijayaraghavan and set to music in ragamalika by one who, at present, is the most sought after musician by dancers, viz Sri Rajkumar Bharathi. The interpretative parts were composed by Bragha Bessel. The nayika in this varnam, rebuffed by Shiva’s long absence, sarcastically confronts him when he suddenly turns up, “So you changed your pose merely because a king requested you in the Velli Ambalam, where the rest of the people would know (“Kaal Mari Adiya esaney,mannan solli kettu…”). Accosting him for believing everything others had to say about her, she wonders if all his remorse when leaving her was just an act. Then comes a typical other woman’s smoothly catty aside as she states that she had never demanded that he share half his body with her (the allusion is to Parvati) nor did she ever ask for a place on his head (the allusion is to Ganga placed on Shiva’s locks)! In the concluding charanam part she wonders “How can I believe in your love again and fall into your trap? You were the one who burnt Kamadeva to ashes. For you it is all a play”. And after all this assertion, is an anti-climax at the finish with the neglected heroine warmly accosting the truant lover! The play or lila has to go on after all! Always a very neat dancer, Uma’s rendition, even in the negative moments, never lost its “uttama” sophistication.

The final segment of pure abhinaya was strung round generally known lyrics (padams and javalis) depicting an inner journey from human longing to spirituality. The start sees the nayika who has lost her heart to the majestic Shiva who with a smile could bring down the three cities. He is the dancing Lord revered by Brahma, Vishnu and the scholars. If only he would throw a glance her way, she yearns! “Teruvil Vaarano, yennai sarru tirumbi paaraano” in Kamas, a lyric by Muttutandavar reveals the ardent desire of the nayika who watching the procession wishes the Lord would turn his head and look her way just for a moment. Lo and behold! When Shiva’s peace and compassion-filled eyes happen to meet hers, she is suffused with a sense of bliss, where worldly concerns and erotic feelings no longer matter. Subramania Bharatiyar’s poetry set to music by K.S. Balakrishnan in raga Sarasaangi and aditalam “Ullum puramumai ulladellam thaanaagum…” expresses the devotee’s world where everything is Shiva, meditating on whom can lead to salvation. The last part shows the devotee in a trance singing Saint Manickavasagar’s Thiruvasagam in the raga Nadanamakritya as scored by K.S. Balakrishnan in Aditalam which dissolves into the Tillana in the same ragam. The changeover from a state of ardent sringar to one of pure bhakti through the space of just one small composition, allows very little time and space for the gradual inner transformation. Under the circumstances, Uma did well. The Tillana brought in the spirit of pure joy, with the Mangalam based on Saint Thirunavukkarasar, set in Ragam Surutti.

Taking the stage for the next half of the evening was young Odissi dancer Nitisha Nanda of Tapaswini Navasadhana, who also like the earlier dancer has honed her talents under many teachers. There is a spring in her step along with a general air of joy her dance exudes. The Mangalacharan invocation was a choreography of Ratikant Mohapatra, with the music contributed by Lakshmikant Palit, the dancer having imbibed the item from Sujatha Mohapatra. After the “Jagannatha Swamy Nayanapatha gami” prayer were salutations to Vinayaka in the hymn “Vakratunda Mahakaya Sooryakoti Samaprabha”, concluding with the “trikhandi paranam”, with the dancer’s obeisance to God, Guru and the audience.

At long last one actually saw Batu being performed. The second item in the concert format as designed in late 1950s, it was choreographed by late Kelucharan Mohapatra. Demonstrating the vigour and exactitude of postures resembling the carved statues on the walls of Orissan temples, Batu requires a bodily stamina and agility few dancers seem to command. So this has become one of the least visited items of the repertoire. With the peppy music in Mohanam, composed by Bhuvaneswar Misra, the dance as performed by Nitisha had sparkle and a joi de vivre. The body taking a circle, in the squatting position with one leg stretched sideways is one of the movements rarely accomplished without a show of visible effort, but this dancer’s body had the lightness with no grunt of effort at any point.

The best of the evening was the Upendra Bhanja’s song “Malli mala Shyamaku dibi” and the devotee here expresses offering her garland of jasmines to Krishna with the greatest of love. If he is tired, I will wipe out his sweat and with sweet sandalwood paste make him feel cool. Not only was the dancer’s expression full of wonder and happiness, but the singing (on the tape) by Ghanashyam Panda exuded a melody and involvement rarely heard today. Since the 1960s, I am yet to witness even Odiyas sing this lyric with such infectious musicality!

The last item “Daksha Yagna” with music in a ragamalika scored by Rakhal Mahanti and O.S. Arun, and choreographed by Sharon Lowen under whose guidance Nitisha is at present, was a homage to the Devi in her varied manifestations — the music full of epithets surrounding her achievements — She is Daksha Yagna Vinashini (the destroyer of Daksha’s Yagna by immolating herself in the Yagna Kund), she is also Tripurasundari, Maharudra Pralaya Saakshini, Shakti Nritya Pradarshini (who presides over all dance), Mahahridaya Nivasini (one who resides in the heart of the devotee) and the last in raga Bhairavi. The simple choreography was well executed.

With the monastic version of Sattriya dance, at least 500 years old, living alongside the proscenium version which began with Raseshwar Saikia Barbayon making bold to teach enthusiasts outside the Sattra in the 1950s, it was not till 15th November 2000 AD that Sattriya entered India’s classical dance scenario. In a Sattra Parichay finish to the three-day festival in memory of Zora Seigal at the IIC, Sharodi Saikia put together a fine mix and match of Sattriya dances showing a combination of facets from its traditional form in Shankardev’s compositions for a proscenium avatar. Starting with Hari Bol and a version of the Gayan/Bayan with two pung and two khartal players, (who imitated actions coinciding with sounds on the tape) Krishna Vandana was by Sharodi herself saluting the son of Devaki with a fleeting glimpse in her dance of the earlier siblings of little Krishna killed by Kamsa. The pure dance Ramdani created for the stage based on Kohl mnemonics, was a mix of elements from the vigor of Behar Nach, Jhumura, and Chali dance with females and an excellently finished young male dancer trained in the Sattra, highlighting the different male and female “Ora” (main stance). Gitor Nach with segments from Madhavadeva’s Vipura Gosua and Chordhara saw Sharodi in the ever charming “makhanchor” showing young butter-stealing Krishna, with an innocent face saying he was removing flies from the butter. He put the blame on the Gopis who were eating butter and putting on weight! Sharodi has a flair for abhinaya which comes naturally to her. Concluding with Shlokar Nach with the power of words, with bits from Gopir Nach and Sutradhari the conclusion of Bhor taal, composed by Narahari Burabhagat from the historic Barpeta Sattra, had four male performers moving their big cymbals in various ways performing expertly to a variety of mnemonics. It is a pity that Sattriya which is rare in Delhi had such a small audience.