Bengaluru’s TOYO brings a classic to the Delhi stage

Their current event is an adaptation of Sakharam Binder. 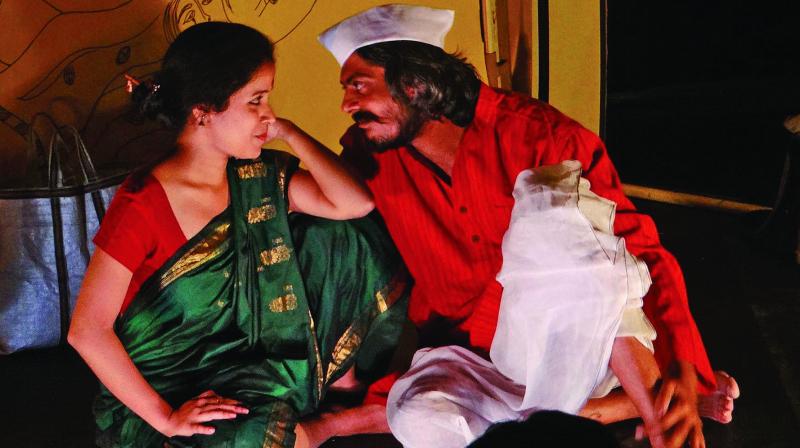 The protagonist offers more than food, shelter and clothing to cast-off wives, who would otherwise be homeless or manhandled.

A Bengaluru-based theatre group, Theatre On Your Own (TOYO), treated a theatre-eager audience in New Delhi with famous Maharashtrian playwright Vijay Tendulkar’s play Sakharam Binder. Originally written in Marathi, a spellbound Delhi audience witnessed an experimental take, Binder, in Hindi with its first outstation performance on April 28 at the India Habitat Centre. Theatre On Your Own (TOYO) is an ensemble theatre group from Bengaluru that was founded by Sarbajeet Das in 2015 to explore exciting new multimedia and storytelling formats for unexpected and evocative performances. It creates theatrical experiences that aim to spark a dialogue between artistes and the audience through their artistry and imagination. These include staged readings, improvisations, workshops (theatre training and corporate), formal theatre and corporate performances as well as original script development.

Amid their distinct TOYO presentation formats of TOYO Originals and TOYO Brotherhood, stands Chuski Natak Ki, where they bring to life some of the best classic literature.

“Chuski Natak Ki is inspired from abstract art, rather any visual language — shape, form, colour and line to create a composition with a degree of independence from visual references across global cultures. Our designs are bold, engaging and unpredictable. We minutely work on integrating rhythm and interjections of the audio-visual aspects to make it available to the audience just enough of what they need to sail with the story. The rest is the charm of solving the puzzle,” says Sarbajeet Das, founder of TOYO.

Their current event is an adaptation of Sakharam Binder. Written by Vijay Tendulkar in 1972, Sakharam Binder portrays the complexities of a live-in relationship that stands relevant even today. The protagonist offers more than food, shelter and clothing to cast-off wives, who would otherwise be homeless or manhandled. He imposes his own rules on them without considering the implications of this arrangement.

TOYO takes this classic play that was banned in 1974, and adapted it into a unique storytelling presentation where we see or are rather shown the mirror which we avoid seeing in. Their take on Binder exposes society’s deep-rooted hypocrisy and power games, camouflaged under a liberal way of living.

“We began reading and rehearsing in a 8x8 square feet room across different time zones, where our director directed us through Google Hangouts/Skype, etc,” a member of the cast said.

Even though it’s quite a story, TOYO’s journey didn’t begin from a physical space. It all started in the mind — that of Sarbajeet Das — who specifically picks stories he has never seen performed, which helps him see the story in his head, in his own way.

But why pick a story that has been presented and performed thousands of times in the last 47 years by various actors and performers?

“It has taken our strong belief to pick and present a classic, written in the 1970s yet remaining highly relevant today as well. Vijay Tendulkar’s Sakharam Binder dared to peel the pretentiousness of a masked society, and so, we dared to continue the peeling,” the director said. It wasn’t easy to adapt and live up to the stature that this play has created over the years. The play was studied over and over to bring out all the possible layers, perspectives and subtext deriving from it. Our so-called modern society, then and even now holds a myopic mirror, which conveniently shows the other side and not us in it. The story had to be told and that too in a way that not just gets through but even cuts through our senses.

And so the presentation went beyond script, beyond characters, beyond just a story and a set, a format, a narration was designed that compellingly pulls you to reflect, to hold that mirror in your own hands and see the real you, to stand up to who you are and to respect what others are as well. TOYO’s Binder is rather bold and makes you so uncomfortable in your seat that you might want to leave it but the seat won’t let you.

For 28 shows in over the last 2.5 years, TOYO’s Binder has stood himself up as a mirror to over 2,000 people (or at least whoever amongst those dared to look at him). Their 28th show was a landmark show at the esteemed Ranga Shankara Theatre, Bengaluru, and on April 28, 2019, they leaped even higher with their 29th and 30th performances at the India Habitat Centre in New Delhi, where Binder finally began its journey outside the home.

“We didn’t pick Sakharam Binder for merely its controversial characterisation or story line. Through Sakharam we found an opportunity to see and reflect ourselves until there was no gap between what was going on inside us and what we chose to show. We are giving every bit of ours to create awareness of our power-driven society, of questions on man vs woman, on independence vs reliance, on whether we really are a modern society or does that exist only in closed doors of our minds?”

Through Binder, director Sarbajeet, who also designed the entire presentation, dug deep to showcase many interesting things that provide an insight to our creative process and a sensorial experience to the audience of what the author Vijay Tendulkar is trying to say through his texts and subtext.

Binder portrays Sakharam through two performers, only one of which has voice. It also uses two different characters, Champa and Lakshmi, to represent one complete woman for Sakharam. The play also uses a dynamic (a homemade, portable and adaptable) set that allows seamless transition of scenes while tightly holding metaphors of the play besides using percussion instruments to cut through the noise of the play.

Tendulkar has used many devices like objects, creatures, etc (Mridangam, Ganpati Puja, Lakshmi’s conversation with the ant, Dawood, and societal norms) in this play to depict, primarily the relationship one has with him/herself thereby reflecting the mental landscape of his characters. And so in its scenography, the Binder set design incorporates all such devices in the form of images and intelligent lighting that directs our minds to correlate the meanings.

Another point the play drives is on the institution of marriage that forms a very strong pillar of our society. Men and women live under the same roof through this institution of marriage. In India, it is impossible to imagine a man and woman living together without marriage. The play drives, almost drills in, the hypocrisy and conflict of both — following society’s norms as well as one’s own free will.

Our lifestyle today has little space for acceptance, adjustment, accommodation, patience, endurance and resilience. The sense of individualism and convenience has overpowered a life of virtue, dignity and commitment, so much that nobody is ready to pull on with anybody. Human relationships have become transactional and utilitarian, in which the principle of use and throw is practised — Lakshmi’s departure and Champa’s arrival is the best example of it.

We are in 2019 now, and this play was written 47 years back and yet draws similarities with today’s world. There is less value on values and such correlation and parallels makes me explore the play in many directions, and has made the design the way it is.

The writer is a theatre artiste based in Bengaluru

Tags: sakharam binder, theatre on your own