A dance festival that brought together diverse dance forms

From Mumbai, the renowned Kathak exponent Rajashree Shirke and her troupe were invited. 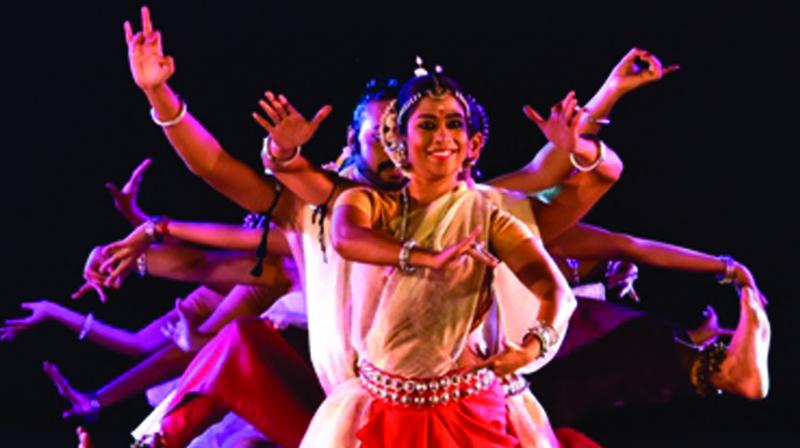 With the backdrop of the Shanti Stupa pagoda, the Dhauli Kaling Dance Festival has become a destination for tourists to visit Bhubaneswar.

With the backdrop of the Shanti Stupa pagoda, the Dhauli Kaling Dance Festival has become a destination for tourists to visit Bhubaneswar. The added advantage is a three-day dance festival which draws a large crowd. Thanks to the strategy adopted by the celebrated Odissi dancer Aruna Mohanty, director of the Orissa Dance Academy, a large number of students attend the festival. Organised by the Odisha tourism department in collaboration with the Orissa Dance Academy and Italian Odissi and Chhau exponent Ileana Citaristi and her Art Vision Institute, the festival is well established.

Curating the festival, the team of experts keeps in view that, along with the classical dance forms, different styles of martial arts and also contemporary dances are presented. Therefore, every year, some of the martial art dance forms like Mayurbhanj Chhau from Odisha, Kalaripayattu from Kerala, Thang-Ta from Imphal are presented inviting different troupes practicing these forms.

On the opening night, Aruna Mohanty of the Orissa Dance Academy and Ratikant Mahapatra of the Srjan Academy of Dance planned a novel presentation of the pallavis like Shankarabharanam, Kirvani and Hamsadhwani. Maintaining the original core of the pallavis, a large number of artistes from both the institutions appeared on the large stage in front. The other group appeared on the back on a higher stage and also on either side of the stage to the right and the left. That looked spectacular. Unfortunately, a few of us arrived late and missed this unique presentation.

From Mumbai, the renowned Kathak exponent Rajashree Shirke and her troupe were invited. She is well known for her katha kathan style of narrating stories with vachikabhinaya in Kathak dance, delivering dialogues. She has a dynamic stage presence and has a sound that can reach far and wide. She has a vivacious presence on stage.

She employs traditional Maharashtrian folk forms along with Kathak. Known for her memorable production Hidimba, the connoisseurs were looking forward to having another production which would display her gifts in choreographing new work. The theme she presented was of Kanhopatra, a Ganika, Nagarvadhu, a courtesan, who turns into a saint. She is drawn to Panduranga Pandharinath ,the presiding deity at Pandharpur. Rajashree wove the story singing by Varakari women playing the manjira, small cymbals and dancing. The scene of Kanhopatra’s birth, her beauty, and vatsalya bhava for her by other inmates was very well choreographed. One expected that the inmates while dancing would perform more Kathak in place of running around with colourful scarves. Their giggling laughing was infectious and well executed by the young dancers. Also, when Kanhopatra grew up and she did not want to learn dance, Rajashree used three dancers who one after another went on to deny learning to dance. That was a very interesting dramatic ploy.

How wonderful it would have been if Rajashree had shown dramatic conflict when the Badshah learning of her beauty asks soldiers to bring her to court. The tension between the Badshah and Kanhopatra would have made dramatic impact.

Kanhopatra follows Varakari devotee women. She wishes to be with Panduranga. Following them, she finally merges with Pandharinatha. The music with typical Maharashtrian touches lent a lot of local flavour. The lead singer Mayur Mahajan could have been more tuneful. All dancers danced with zest and impressed onlookers with their stylistic dancing. Rajashree’s son Aniruddha Shirke conducted the music accompaniment with his usual competence.

Astad Deboo presented his recent work on Gandhiji, which I was privileged to see at the golden jubilee celebrations of the NCPA in Mumbai. Astad edited it and did not perform the third part. Astad has titled it as Unbroken and Unbound. Along with his troupe, consisting of Shamshul, Vicky Yadav, Pradeep Kumar, Narayan Sharma, Rohit Verma, Astad showcased the meditative quality with which the work is imbued. The first part with Astad offering prayer was engrossing. The way Astad in slow motion moves his body and bends backwards, raising arms heavenwards, almost makes one marvel at his defying the laws of gravitation. The sequence of dancers performing with the lathis, sticks suggesting the Dandi March in terms of choreography, is brilliant. The way Astad uses the space, distance between the dancers, the use of sticks, jumps, coming together, drawing arcs on the floor and movement in harmony is mesmerising. The perfection displayed is praiseworthy.

But the chamtkar, vismay and surprise come in the end when masks of separate parts of the human figure are brought together and they form the face of Gandhiji on whom the spects are placed. Astad arrives on the stage and offers prayers to the face thus formed of Gandhiji. The audience stood up and gave Astad and dancers a standing ovation. The mask was designed by Shamshul. The white costumes and dervish-like movements of pirouettes Astad spun took one’s breath away! Bravo Astad!

The next day, Shanti Mantra, choreographed by Aruna Mohanty with a large number of students of the Orissa Dance Academy once again reiterated the abilities of Aruna as a choreographer who can handle on a mega scale! Right from the central figure of a small Gotipua boy dressed as a girl (or was he a young boy barely seven?) to young dancers of different age groups, the spectacular presentation covering the vast sage and two sides spoke volumes of her imagination.

The next presentation of Sharmila Biswas’ innovative, imaginative and creative choreography drawing from the fundamental, basic position of Chauka from which innumerable movements spring was captivating. Prior to that the prayer “Ahvahani” with notes of Azan and other religious prayers for worship of the stage was noteworthy for its amalgamation of suggestive samabhava.

Whereas the other items moved in quick succession, Maya Manav based on Vishwanath Khuntia’s Ramayana where March takes the form of golden deer and entices Rama to follow it to kill, was a much layered and complex presentation, which sets Sharmila apart from her contemporaries. Using the folk form of Pala, where participants play several roles, all turn into hunters to run after the mayavi deer, sometimes they turn into the deer, jumping, appearing and disappearing, dancers holding bows and acting as Lord Rama — the various ways in which dancers perform was very interesting. Sharmila created illusion, maya, with excellent props of colourful scarves which dancers held in hands crisscrossed and they created a maze of patterns. She left the end as an open ended performance.

She thinks “out of the box” and explores the Odissi elements of the Odisha region, enriching the choreography and offers regional flavour which in turn expands the horizons of dance.

The contemporary dance troupe from Bengaluru of Gurukulam of Ranjan Mullarat and group offered the choreographed version of Kalaripayattu. Dressed in red costume and black waistbands, the male and female dancers demonstrated to the background music, various exercises of attack and defence. It appeared repetitive, but the overall impression was of organised choreography. It was obvious that the artistes were all trained in martial arts thoroughly.

On the final day, the programme opened with Mardal Vadan, the playing of Mardala led by Satchidananda Das and their group Mardeli. The collective sound of ardha matra tala of eleven beats turned into giving an impression of the strong sound of gathering clouds. The two rows of mardala players vied with each other in playing, showcasing virtuosity. There was a feeling amongst the connoisseurs that the two groups could have indulged in sawal-jawab, repartee and also challenges evoking gentler sounds.

Rama Vaidyanathan and her troupe from Ganesha Natyalaya from Delhi offered choice items in their scintillating Bharatanatyam, displaying a high standard of technique and sophistication. Rama is a versatile dancer and also an imaginative choreographer. In Bodhana, awakening of the devotees and harkening them to wake up, Rama underlined spiritual concepts beautifully. Not merely to wake you physically but awaken the inner feelings and surrender to Lord Shiva. The performance by the team was in perfect sync. Verses from Manikvachagara’s Thiru Vempavai found felicitous expression in their abhinaya. The music by Sudha Raghuraman was evocative.

Bindu, another symbolic representation, wove in suggestion of divine union, intersecting triangles and concentric circles. It gave scope to Rama to explore the Bharatanatyam form to concretise abstract images. Two energies uniting generated pulsating energy that expands and contracts. The dancers performing nritta reflected it succinctly. And the simile of the sun and moon uniting as envisioned in Shankaracharya’s Soundarya Lahari set to music by G.S. Rajan was a visual treat.

Swati Tirunal’s Bhayili Piya reflected two states of physical love: shringara and bhakti. The metaphor worked well in dance when the nayika requesting Krishna to spend the night when the moon was shining and then undressing, suggesting surrender to God, was danced with rich nuance. Hand-in-hand, the group showing it created a cluster, which could have been avoided as visually it was clashing. Instead, the dancers could hold hands and form a circle at the back.

Bibhudatta Das and group Maa Bhairavi Mayurbhanj Chhau Nrutya Pratishthana in their exposition brought out the martial spirit with soldiers marching. Their dramatic presentation of Abhimanyu Vadh invariably touched the hearts of spectators for the injustice done to Abhimanyu. The arial circular jumps by the dancers were spectacular and won rounds of applause.

Curating a dance festival is a difficult and demanding task. However, it would always help to suggest or double-check with connoisseurs about some invited groups.

Dhauli Kaling Festival is a major renowned dance festival and has gained great reputation. Under the able guidance of Aruna Mohanty it fulfils the dream of Guru Gangadhar Pradhan.