Art in the age of technology and over consumption

Artist Kaushik Mukhopadhay’s new work Squeeze lime in your eye is a subversion of aesthetics and the role of an artist. 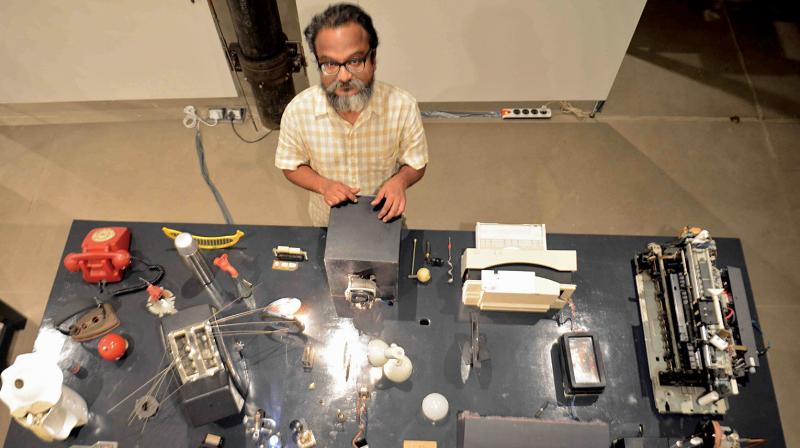 Kaushik Mukhopadhyay at the art show in Chatterjee & Lal gallery in Mumbai.

Everything is broken — gramophone, headphone, toaster, scanner, printer, computer monitors, disc player, cameras — at Kaushik Mukhopadhay’s new show, Squeeze lime in your eye. Since his last show in 2009, the artist says he has been “repairing” gadgets at his studio. “I asked all my friends to give me the gadgets that they were throwing away, and while I was repairing them I started to see these machines in a new way,” said Mukhopadhay.

After years of trial and error, and daily work, he came up with three tables filled with the gadgets. As he would turn the switches one, the gadgets would come alive and perform “precarious choreographies”.

Sitting in a pristine white washed gallery at Chatterjee & Lal, Mukhopadhay kept a constant vigil on the motors and regulating their speed. At one moment, he rushed to the see check the discman, which had burnt due to overheating. “That’s okay, I can replace it with something else,” he said, with a nonchalant shrug.

“The 90s,” he pointed out, “all of a sudden had so many gadgets. But now they are all replaced. I thought of making them through a different light. In a monograph written by poet and cultural theorist Ranjit Honskote compares Mukhopadhyay with the protagonist of Ritwik Ghatak’s masterpiece Ajantrik (The Pathetic Fallacy). “Mukhopadhyay is happiest when he is talking to machines,” Hoskote writes, further adding, “Mukhopadhyay incarnates the archetype of the artist as inventor; his art-making is based on a voracious collecting practice.

To make “art with broken gadgets and make a show out of it, Mukhopadhay’s new work is more than just a nudge nudge, wink wink at a post-everything world where nothing makes any sense — a subversion of aesthetics, form and the role of an artist.” “In a way, I am still an old school artist. I have not able to internalise the new theories. For me, the post modernism made an impact, and that’s where I’m still comfortable. If I can strip the aura from the art, the artist or even the art gallery, I think I would be relatively successful,” he said.

His art, he said, is not in the aesthetic quality of the work, but in the making of it. “Actually I’m very particular about the circuit board. I use different colours of wire, and the board has to be neat,” he adds. One could hardly miss the hint of irreverence.

As a student at Rabindra Bharati University, Calcutta and Kala Bhavan, Shantiniketan, the artist said, he felt restricted. It was only after leaving home and going to Kanoria Centre for Arts, Ahmedabad, he said, he could find his true calling. But home has never left his subconscious. In one of his work titled Music lover’s room, an old Russian vinyl plays without emitting any sound. But it sparks off electric to the top of the small tower, where if one looks closely will find a small plastic chair with the miniscule speaker pointed towards it. Perhaps, for those who want to listen, could listen to different music. Squeezing lime into eyes, it is said changes colours. “One has to change their perception of art as they enter the gallery. It is up to them if they like it or dislike it,” he concludes.