Theatre veterans Shanta Gokhale and Mahesh Dattani have collaborated to bring to the stage the conflicts and struggles of the Iron Lady Irom Sharmila. 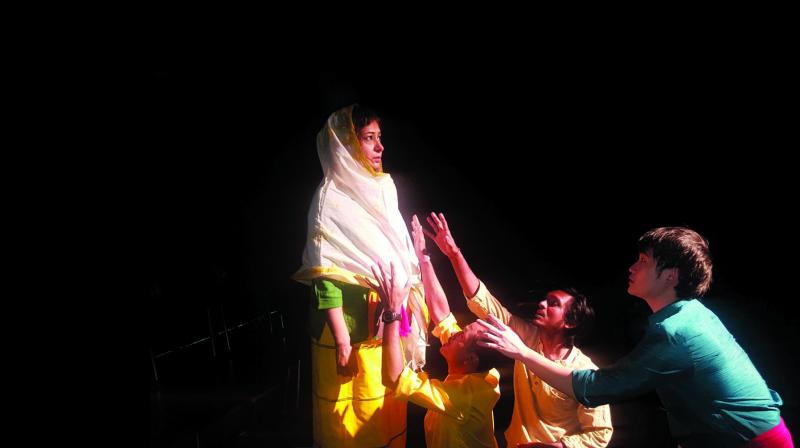 On 26 July 2016, when the world was glued to their television sets watching the teary eyed Irom Sharmila breaking her 16 years of hunger strike, the eminent playwright and theatre-critic Shanta Gokhale was also grappling with the news. Having gained a keen interest in the revolutionary’s non-violent struggle to repeal Armed Forces Special Powers Act (AFSPA) from Manipur, Gokhale, in her solidarity, had already penned down a tributary play on her undying spirit. Although the schismatic event deemed Gokhale’s play irrelevant, the subsequent developments in Irom’s life including her standing in elections and her desire to get married, presented conflicts that reinforced Gokhale to pen the following act in her play. The two-act play Mengoubi: The Fair One which returns for its fifth show in the city today, is not just a regular tribute to the Iron Lady, but within its emotional conflict, brings to the fore the magic that Gokhale and director Mahesh Dattani are known for creating.

After breaking her strike, when Sharmila contested the elections, her loss produced emotional reactions that ranged from disappointment to shock. Framing this event as a point of conflict in the narrative, Gokhale says, “Now she was out; she was in the open; she could eat and drink; she was standing in the elections, but there was a man waiting for her for a long time. As a woman, I just wondered which way she would go?  Would she continue her political work even after her defeat, or would she choose love over political work? So, that became an interesting question for me.”

Much to our surprise, the first act of the play situates itself in a house of a middle-class homemaker in Delhi, who in her blissful ignorance is far removed from the socio-political upheaval of the North-Eastern state. As Gokhale reveals, this character is an amalgamated reflection of the discriminatory, ignorant, and complacent middle-class society, and it was important to locate her in Delhi since it’s the centre of the power. The nameless character soon finds herself trapped in nightmarish sequences where an ensemble of storytellers acquaints her with the culture of Manipur and the story of Sharmila.  It is in these dream sequences when the narrative moves into a surreal realm, where the eminent veteran theatre director Dattani finds his aesthetic fulfillment as a director.

“It has elements of storytelling, so it was possible for me to bring an ensemble of dancers and storytellers to tell these stories. We see a very visually stylistic enactment of stories of Manipur; some of them are very romantic while others are horrific and violent. It sort of tells you what the country is and what the beauty of the country stands for, and how the beauty of the country, the state that is being violated,” he reveals. Additionally, talking about his play-design he says, “There is quite a bit of dancing and creating strong images by the ensemble through the movement and tableau of the military, insurgency, and innocent citizens. I think that is what is the storytelling is in my design.”

Dattani, who has written some of the most widely- staged English language plays in India, finds directing someone else’s text more creatively liberating and inspiring. While Gokhale, in a bid to universalise the play had parallels to the Greek tragedy Antigone in the script, the director removed the segment as he reveals, “As a dramatist, I think its very important to focus on the specific moment and location. And the universal truth will come true as a result.” Although an eclectic selection of songs used in the play like John Lennon’s Give Peace A Chance, Tagore’s Ekla Chalo Re, some original compositions set to the poetry of Sharmila, Thangjam Ibopishak and lyrics by Gokhale herself, among others, is an evocation that the core conflict of the play is truly universal.

While the forces in the first act focuses on bridging the distance between the two women, almost allegorical of the alienation between the mainland and the North- Eastern states, the second act brings them together in a surreal space where the actuality of the meeting remains ambivalent or as Dattani puts it suavely, “after a point we stop caring what’s real and what’s unreal and get involved in the dramatic situation above anything else.” For the second act, Gokhale was actually inspired by a Facebook post written by her daughter actress Renuka Shahane who offered her house to Sharmila when the latter had no place to stay after breaking her strike. “All of us were extremely upset the way she had been rejected.  Ironically, she had to continue living in the hospital where she was incarcerated, so for a woman like that not to have a home in her country for which she had to keep fighting seemed so tragic. So, I thought it’s the kind of thing this woman would do, and so she writes a post-card inviting Sharmila,”
Gokhale reveals. Moreover, as the dramatic conflict of the play based on Sharmila is completely external in the first act, we see a change in the conflict, as Sharmila now appears to be torn in an internal conflict in the second act.

Mengoubi: The Fair One is definitely a beautifully spun ode to Sharmila, but the fact that it’s not written or directed as a bio-drama, brings forth the muse’s intimate nature of her struggle, hence humanising the ignorant. “Shanta has not written a bio-drama, it does not give you an account of what has happened in her life. It gives you a situation and her immediate conflict. We don’t really know what she is thinking at this point. So it is inferred upon by the playwright, that this is her dilemma, and that is what the play focuses on,” concludes Mahesh.

The play will be performed today and tomorrow at Prithvi Theatre, from 9 pm onwards