Gerish Khemani’s Ripples is a play that questions some of the fundamental problems in education. 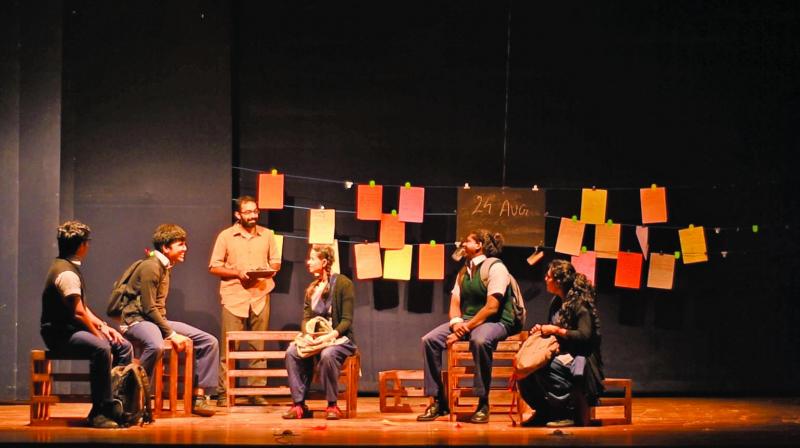 A still from the play.

Ripples, a play by Gerish Khemani, which had a humble opening in June 2015, has steadily built a loyal audience and managed to create the desired ripple in the city’s theatre circles. Today, as the play completes 30 shows, Gerish looks back at the journey that his first venture as a complete theatre maker has had. “It was while teaching at Shishuvan School in Matunga that I stumbled upon pre-independence Indian educator Gijubhai Badheka’s classic on education which he had written in 1920, Divasvapna,” recalls Gerish.

As a drama teacher, his interest in education was inevitable. He ended up combining it with his passion for theatre. “Reading the book after 100 years, we sadly found it relevant, even sadly radical for the times we live in. That learning can be fun. That it can be activity-centred and involve the whole body and being of the student and not just the intellect,” he points out. The initial idea, he explains, was to make Divasvapna more contemporary. “In the text, the students were almost like cardboard characters. My idea was to flesh out few interesting characters out of these students,” he says.

But in the search, he observed how the student-teacher relationship over the years has changed. “Earlier, teachers were seen as know-alls. There was no vulnerable side to a teacher. Whereas today, the role of a teacher is that of a facilitator,” he adds.

Speaking on the creative process of writing the play, he says, it all had begun with writing vignettes. “But the play lacked a central conflict, which is when Harsh Desai came in as a co-writer,” he says.

Abhijit, a central character in the play, leaves his cushy job and lifestyle in Mumbai to take up a teaching job in the hinterland of Maharashtra. In the classroom, he meets a bunch of interesting students. Within the span of 100 minutes, which is the duration of the play, the teacher and his students end up shaping each others’ lives irreversibly.

Dead Poet’s Society, To Sir With Love and Taare Zameen Par are perhaps some of the popular references to the content of Ripples. However, Gerish says it could go much beyond that. On a note on the style and format of the play, he writes, “The play is a journey, which is unfinished, like in life… but a redemptive one, a start of a new possibility in everyone’s lives. There are also stories within the story, plays within the play that happen, where the texts are strategically chosen by the teacher, as it speaks to the life situation of a student,” he says, adding, “at the end, it is a celebration of storytelling.”

After the show in Mumbai, the play is scheduled to travel to cities like Bangalore, Coimbatore and Pune.