In conversation with Vidushi Aruna Sairam

The Sangita Kalanidhi award is an acknowledgement from your peers; it is a very special award, definitely the pinnacle. 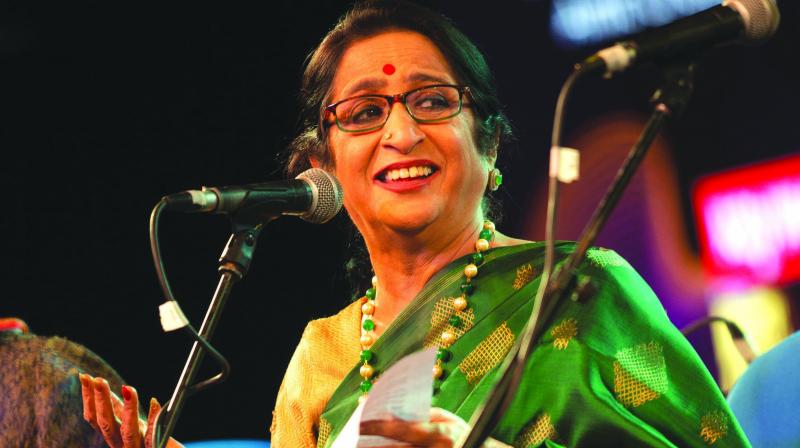 This year’s Music Academy’s Sangita Kalanidhi awardee Vidushi Aruna Sairam is a household name, she has a perceptible presence and her charm is undeniable. Affable and articulate, she spoke illuminatingly on a variety of subjects in a free-flowing chat...

Arunaji, why is the December season so vital for Carnatic musicians?
I would like to compare the music season in December with the rituals in a temple — the main deity remains in its place, accepting offerings of devotees regardless of the activities going on elsewhere. The “utsav” murti in the temple goes out, is taken from time to time on various ritualistic traditional journeys, but eventually, always comes back to the main deity. It’s like that with our December season — it’s the rock solid immovable reality like the Lord; regardless of what happens throughout the year with each one of us artists, we eventually all come back during Margazhai to support the season, which in a way is our main role as musicians. We all feel that, we all support the season; it’s our way of giving back to the system which nurtured us.

The Sangita Kalanidhi award that you will receive on January 1st is in a way a culmination of your musical journey. Tell us more.
My whole career bloomed late, as a result of my own choices. I was 10 when I started learning from Brinda amma, (Vidushi T Brinda) she taught me till 1979, because after that she stopped travelling. By the time I went to her, I already had learnt from my mother, my first guru. My mother (who learnt from the Alathur brothers) taught me “laya”, she would make me sing a varnam in six progressively geometrical speeds. I remember I knew compositions in 150 Ragas by the time I went to my main guru, T.V. Brinda.

Brindamma taught very few people; she was a very great teacher, she had an exclusive style. (Incidentally, last year’s Sangita Kalanidhi award was given to Chitravina Ravikiran, also a disciple of Brindamma).

She was a devadasi, and powerful women of her ilk had their own style. She could hold her own in small baithaks of vidwans; she was a cut above the rest. She would never allow me to notate, she would never let me write down what she taught. She was very patient and would meticulously continue teaching you till you got it perfectly. She made us delve into the music and the piece; when she felt I had got it right, she would the next day say now write it down and let me check. So the digestion of the material she gave was total. Kalpana sangita — the improvisational aspect of singing was taught totally differently. I recall I got a good opportunity to present a prestigious concert — she said she would guide me. But how she taught me, was telling me to just sing, to create the phrases of the alapna myself, to know how to convert the key notes and phrases of the composition into an alapana. She did not give set phrases and would say mug it up. So learning how to do the alapana took a month! I remember I sang Varali, quite successfully. My other teachers were mentors; my main gurus were my mother and then Brindamma.

The recognition I wanted and for which I moved to Chennai, has happened with this award. Right or wrong I wanted endorsements from the peak of the Carnatic music world, Chennai. I made the move from Mumbai to Chennai slowly. I sang a few concerts in the 1970s, a few more in 1980s. It was in the 1990s that I spent even more time in Chennai, hiring an apartment there. Many people then thought I was a permanent resident. Finally in 2002 we moved lock stock and barrel; my husband took premature retirement.

The Sangita Kalanidhi award is an acknowledgement from your peers; it is a very special award, definitely the pinnacle.

Arunaji you are a maverick in the world of Carnatic music, with your unconventional repertoire, inclusion of North Indian musical ideas, your novel collaborations. Please elaborate.
In the 1980s I started singing “abhangs” which the public loved, though in those days I had no real audience to speak of! I felt I liked the genre and so I sang it. The meaty portion of my concert would be traditional, in the end I would experiment. Slowly my audience grew, and my experiments today are the norm! I am told by organisers that nowadays young singers write when they are asking for concerts; we also sing abhangs! When Tyagaraja composed, he was not accepted, he had critics. So any change takes time; you have to have faith in yourself and your music.

Growing up my idols were M.S. Subbulakshmi, M.L.V., Amir Khan sahib, Bhimsenji and Girijaji. Of course my God was and is my guru Brinda amma. I loved Narayanswamyji, Lalgudiji, Ravi Shankarji, Ali Akbar Khan sahib. So the influences are visible in my music. Even today, I listen to a lot of music to unwind and also for inspiration.

Whenever I perform outside of my Carnatic audiences, over the years I have learnt that if you communicate with conviction, you can reach out to any audience. Concert presentation is very important — what to sing, how to present contrasts, how to present it. I have to be faithful to what exactly makes me the person I am — my training, my environment, my background. I decided to present heavy classical pieces, interspersed with lighter more enjoyable pieces, some familiar stuff — my failures taught me how to perfect. Concert presentation was not taught to me by my Guru; it’s something that I had to acquire myself over the years.

On collaborations — it’s easier for me to sing with male voices due to the pitch. I have collaborated with so many musicians — U. Shriniwas, Shankar Mahadevan, Zakir bhai and jazz musicians, Dominque Vellard.

Your familiarity with North Indian music happened because you lived in Bombay?
All the southern states used to have one resident North Indian musician; so in a way familiarity with the genre has happened over the years. I heard that the Maharaja of Mysore had even invited Gauhar Jaan to stay in his court in her final years, after her singing years were over, before she died. I would say there is a lot of exposure of most Carnatic practitioners to North Indian music and musicians. The reverse did not happen; Muthuswamy Dikshitar travelled by foot to Benaras and adopted many ragas like Jaijwaiwanti into the Carnatic pantheon. The reverse didn’t happen until now in the 1950s when ragas like Kirwani Charukeshi have become so popular.

Vidwan A.S. Mani, disciple of Tiger Varadacharyar, used to live in Bombay He knew all of Rasoolan Bai’s pieces and used to guide me as to what to hear, what to look out for. I personally sing songs in Gujarati, Hindi, Marathi, even Punjabi.

The link between the two systems of music is undeniable; what about the differences?
Definitely the music of North and South are similar, despite differences — for example, our tillana is the same as the tarana; I would say it’s something that was inherent to us in India and not imported from Persia as some say.

In the Carnatic system, certain ragas are not conducive to expansion, as the “gamakas” don’t sound so natural, so those are not usually treated as serious pieces for long renderings. Others which have been imported from the North Indian tradition too, like Bihag too are usually not given a prolonged treatment. Our Bhairavi and Thodi which are different to the North Indian ragas of the same name, to name two, are the main ragas. This is a big subject!

To conclude, after getting the ultimate award (Sangita Kalanidhi) what next?
I definitely want to teach more, as I have not concentrated on that. I am very adventurous and I definitely want to explore more, try new different things like I have done in the past.

The writer writes on music, musicians and matters of music

Latest From Just In