Larnaca/Cairo: The hijacker of EgyptAir plane, currently held up at the Larnaca airport in Cyprus, has demanded the release of specific prisoners in Egypt, media reported on Tuesday.

The EgyptAir plane, with 80 onboard has been hijacked, flying from Alexandria to Cairo. (Photo: Screen grab)

The hijacker of EgyptAir plane, currently held up at the Larnaca airport in Cyprus, has demanded the release of specific prisoners in Egypt, media reported on Tuesday.

A hijacker, identified as Ibrahim Samaha, had seized an Egyptian airliner earlier in the day and diverted it to Cyprus, triggering a hostage crisis at Larnaca airport on the south coast.

Negotiations with hijacker resulted in the release of all the passengers except four cabin crew and three 'foreigners', according to the latest press release by EgyptAir.

The hijacking of an EgyptAir plane to Cyprus is not related to terrorism, the island's President Nicos Anastasiades had said.

"The hijacking is not terrorism-related," he told a joint news conference with the visiting president of the European Parliament Martin Schultz.

Anastasiades said the Cyprus government had done everything it could to ensure the safe release of the passengers, most of whom were reported to have been set free.

According to local media reports, the hijacker has been identified as Ibrahim Samaha. He has demanded asylum on the Mediterranean island, the state radio said.

Media earlier reported that the hijacker demanded asylum in Cyprus and also that he be allowed to see his estranged Cypriot wife. The woman was being brought to Larnaca airport, government source said.

The hijacker is a native of the Egyptian Mediterranean city of Alexandria and a dual Egyptian-American citizen.

The woman lives in the village of Oroklini not far from the airport.

The hijacked EgyptAir plane carried 21 foreigners including 8 Americans, according to the aviation ministry.

Egyptian civil aviation said the hijacker had threatened to detonate an explosives belt which he claimed he had on board the Egypt Air plane.

The Larnaca airport has been closed after the hijack. Flights to Larnaca in the south were diverted to the Paphos airport in the west, the officials said.

The plane was parked on the tarmac away from the new terminal building but just 200 metres (yards) from a beach where dozens of foreign tourists were out.

The aircraft was cordoned off by armed police.

"The Airbus A-320 carrying 81 passengers and flying between Alexandria and Cairo was hijacked. The pilot said that a passenger told him he had an explosives vest and forced the plane to land in Larnaca," the Egyptian civil aviation ministry said in a statement. 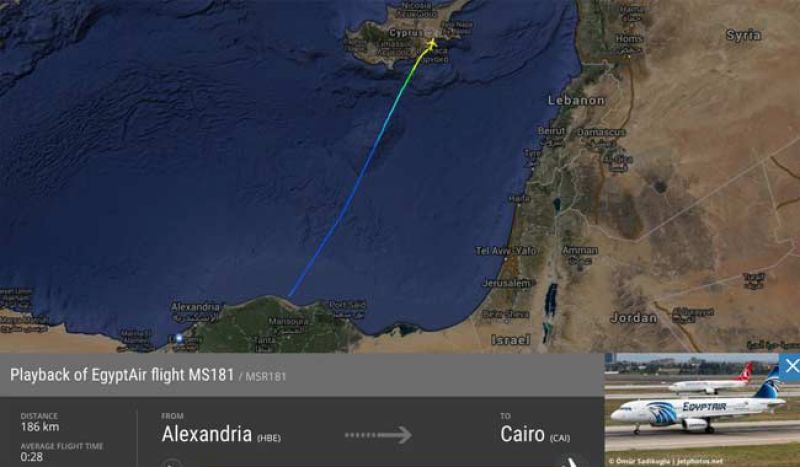 The hijacker contacted the control tower at 8:30 am (0530 GMT) and the plane was given permission to land at 8:50 am, Cyprus police said.

A crisis team was deployed to the airport, the main entry point for tourists to the Mediterranean resort island. The hijacker made no immediate demands and later allowed Egyptian passengers to disembark, Cypriot state television reported.

The Egypt Air plane was headed from the Mediterranean coastal city of Alexandria to Cairo with 81 passengers on board when it was seized, Egyptian civil aviation said.

Larnaca is no stranger to hostage crises. Several hijacked planes were diverted to the airport in the 1970s and 1980s.

The incident came after a Russian airliner was downed on October 31 over the Sinai Peninsula, killing all 224 people on board. The Islamic State group claimed to have smuggled a bomb on board the plane.

In 1988, a Kuwait Airways flight hijacked en route from Bangkok to Kuwait was diverted to Mashhad and later to Larnaca, where hijackers killed two Kuwaiti passengers and dumped their bodies on the tarmac.

In February 1978, an Egyptian commando unit stormed a hijacked Cyprus Airways DC-8 at Larnaca airport, where 15 passengers were being held hostage. Some 15 Egyptian soldiers were killed and 15 wounded. All the hostages were freed and the hijackers arrested.