General Naravane commanded a Rashtriya Rifles battalion in Jammu and Kashmir and an infantry brigade on the eastern front. 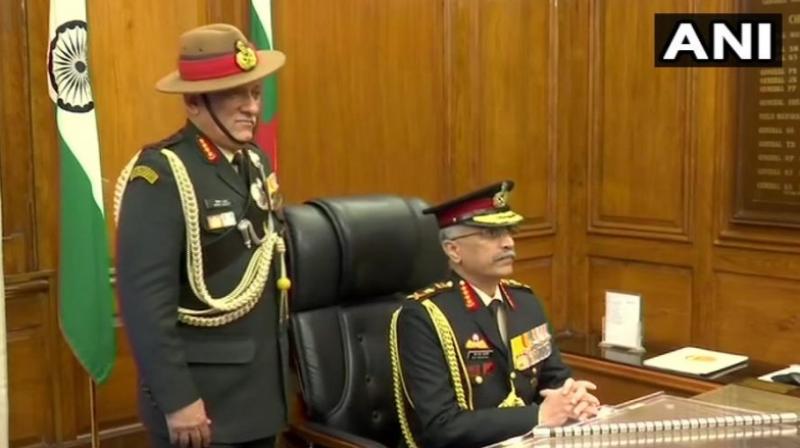 Gen Naravane, who was serving as vice chief of the Army, succeeds Gen Bipin Rawat, appointed the country's first Chief of Defence Staff, a post created to bring in operational convergence among the three services. (Photo: ANI)

New Delhi: General Manoj Mukund Naravane on Tuesday took over as the 28th Chief of Army Staff, helming the 1.3 million-strong force at a time India faces evolving security challenges such as cross-border terrorism and an assertive Chinese military along the border.

Gen Naravane, who was serving as vice chief of the Army, succeeds Gen Bipin Rawat, appointed the country's first Chief of Defence Staff, a post created to bring in operational convergence among the three services.

As Army chief, Gen Naravane's priorities are expected to be to implement long-pending reforms of the Army, contain cross-border terrorism in Kashmir and bolster the operational capabilities of the force along the northern border where China has been ramping up its military infrastructure in Tibet.

Before being appointed vice chief, the alumnus of the National Defence Academy and the Indian Military Academy headed the Army's Eastern Command that takes care of India's nearly 4,000-km border with China.

In his 37 years of service, Gen Naravane served in numerous command and staff appointments in peace, field and highly active counter-insurgency environments in Jammu and Kashmir and the Northeast.

He also commanded a Rashtriya Rifles battalion in Jammu and Kashmir and an infantry brigade on the eastern front.

Besides, he was part of the Indian Peace Keeping Force in Sri Lanka and served as India's defence attache at the Indian Embassy in Myanmar for three years.

He was commissioned into the 7th battalion, the Sikh Light Infantry Regiment in June 1980.

The general is a decorated officer who has been awarded the 'Sena Medal' (Distinguished) for effectively commanding his battalion in Jammu and Kashmir.

The outgoing Army chief thanked all the army personnel and their families for extending full support to him in his three-year tenure.

After a farewell Guard of Honour, Gen Rawat, who paid respects to fallen soldiers at the National War Memorial, also expressed the hope that the Army will rise to greater heights under its new chief.

"I express my gratitude to all soldiers who have stood steadfast under challenging circumstances, performing their duties, keeping the traditions of our armed forces. My special compliments to our soldiers on northern, western and eastern borders who are braving tough winter and icy winds, steadfastly in guarding our country," he told reporters.