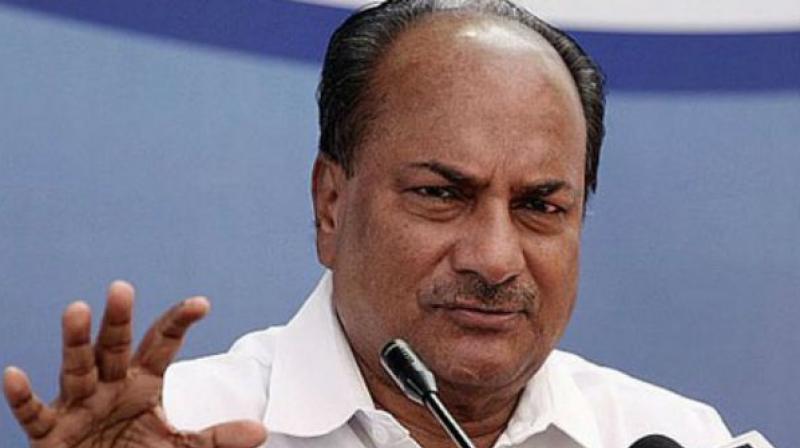 ‘I would like to say categorically that Sonia Gandhi and Rahul Gandhi never interfered in deals and procurement. AgustaWestland was selected after the evaluation was done by a team of officials,’ said former Defence Minister AK Antony. (Photo: PTI)

"I would like to say categorically that Sonia Gandhi and Rahul Gandhi never interfered in deals and procurement. AgustaWestland was selected after the evaluation was done by a team of officials," added the former Defence Minister.

He said that the UPA government ordered a CBI probe after the Italian government raised concerns that there was corruption in the deal.

Questioning Prime Minister Narendra Modi-led NDA government's track record with regard to deals and corruption charges, Antony said that when media reports talked about corruption in any deal, an inquiry was initiated.

"We took the decision to blacklist five to six powerful companies, including one American, Russian and Singapore's company. That was our track record, but what is the track record of the present government," he questioned.

Echoing similar sentiments, senior Congress leader Kapil Sibal said that the Special Public Prosecutor in the case is working as per the instruction of Prime Minister Modi, adding that the Congress party does not trust any investigating agency now.

"It's shocking! How can a public prosecutor who is representing both ED and CBI come to court and play politics? He is doing as he is instructed by the Prime Minister. We do not have any faith in any agency now," he said.

"He has also spoken about 'the son of the Italian lady' and how he is going to become the 'next prime minister of the country'," Singh had told the court on Saturday.

Michel was arrested on December 5 over his alleged involvement in the AgustaWestland VVIP chopper scam, following his extradition from the UAE. He is currently in the ED custody.

The helicopter deal finalised during the previous government headed by then Prime Minister Manmohan Singh got mired in the allegations of kickbacks.

According to the ED charge sheet, Michel had received kickbacks to the tune of 30 million Euros from AgustaWestland for the deal involving the purchase of 12 VIP helicopters. The deal, signed in 2007, was scrapped in 2013 following the bribery allegation.