‘…don't come to me crying. If you get into a fight with someone, beat up that person. If possible, kill him,’ Raja Ram Yadav said. 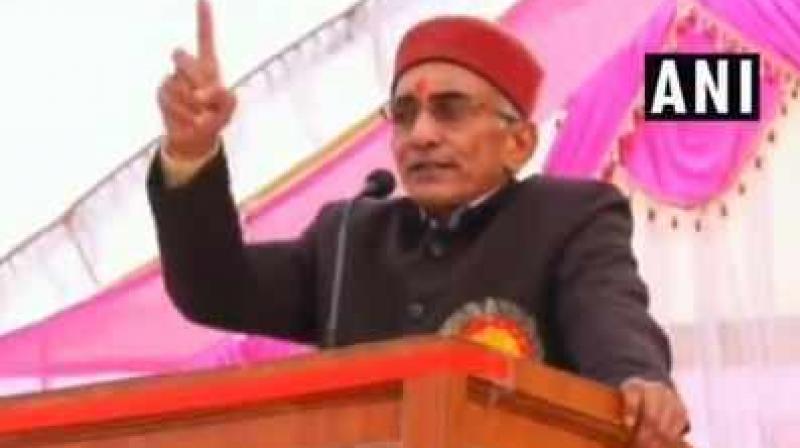 Lucknow: The vice-chancellor of the Veer Bahadur Singh Purvanchal University in Jaunpur, Uttar Pradesh has landed in a controversy after a video purportedly showing him telling students to kill their opponent if they get into a fight went viral, prompting the state government to ask him to present his side of the story.

In the video that has gone viral on the social media, Raja Ram Yadav, the VC, is purportedly seen telling students to kill their opponent if they get into a fight.

Deputy Chief Minister Dinesh Sharma, who also holds the higher education portfolio, told PTI, "I have asked the vice-chancellor to give his version of the story."

In the video clip, the VC is purportedly seen telling students: "Agar aap Purvanchal University ke chhatra ho to rote huye mere paas kabhi mat aana. Ek baat bata deta hoon, agar kisi se jhagda ho jaaye to uski pitai karke aana aur tumhara bas chale to uska murder karke aana, uske baad hum dekh lenge (If you are a Purvanchal University student, don't come to me crying. If you get into a fight with someone, beat up that person. If possible, kill him. I will take care of things after that)."

Asked about his remarks, the VC said, "The lecture, which I had delivered at a college in Ghazipur, was presented out of context. I meant to say that students should shed disappointment and sadness and become brave and self-reliant."

Reacting to the incident, state minister and spokesperson of the Uttar Pradesh government Siddharth Nath Singh said, "It was wrong. He (Yadav) cannot make such comments. He should teach students about peace.... A VC of such a mentality has no right to stay in his position. I hope the deputy CM will take appropriate action."

National Conference (NC) vice-president and former Jammu and Kashmir chief minister Omar Abdullah has also reacted to the incident. "Get in to a fight, commit a murder as a result and this university VC will take care of things. This is what passes for an education in some places these days. Not surprisingly the audience even applauds his assertion," Abdullah said on Twitter on Sunday, besides posting the video clip of the purported incident on the microblogging website.