The 182-metre-tall statue was inaugurated by Modi on the same date last year. 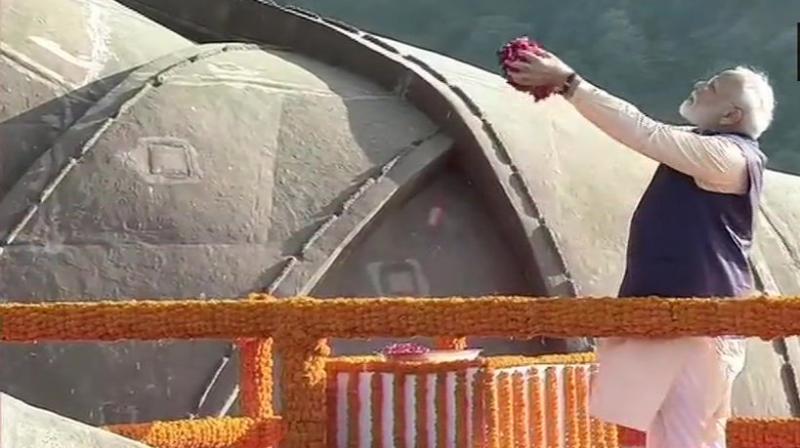 Kevadiya: Prime Minister Narendra Modi on Thursday hailed his government's decision of abrogating Article 370 and said that the special provision was the reason behind separatism and terrorism in Jammu and Kashmir.

The Prime Minister made the statement at a day when Jammu and Kashmir and Ladakh officialy became Union Territories.

Launching a veiled attack against Pakistan, the Prime Minister said: "Those who can't win a war against us are challenging our unity. They try to break our unity and try to groom separatism. Our unity is being challenged. They forget that no one could defeat this unity."

Speaking on the National Unity Day, he said: "With the blessings of Sardar Saheb, the country has taken a very big decision to defeat these forces a few weeks ago. Article 370 gave nothing except separatism and terrorism to Jammu and Kashmir."

"For decades, this Article 370 had created a temporary wall among us Indians. Our brothers and sisters who were on the other side of this temporary wall, they also lived in confusion. The wall which was increasing separatism and terrorism in Kashmir, now that wall has been demolished," Modi added.

The Prime Minister said that nearly 40,000 people in three decades have been killed by terrorists in Jammu and Kashmir.

The Prime Minister also said that Jammu and Kashmir and Ladakh are moving towards a new future on the birth anniversary of Sardar Vallabhbhai Patel.

Earlier, Prime Minister Narendra Modi paid floral tributes to Sardar Patel at the Statue Of Unity here on the occasion of Rashtriya Ekta Diwas on Thursday.

When the Prime Minister was offering floral tributes to Patel, flower petals were also showered on the world's tallest statue by an Indian Air Force helicopter. Patel's birth anniversary is celebrated as "Rashtriya Ekta Diwas".

Later, the Prime Minister led the people present at the grand event in taking a pledge and also participated in the "Ekta Diwas Parade".

PM @narendramodi administers National Unity Day Pledge to all the people present at Statue of Unity in Kevadia on the occasion of #RashtriyaEktaDiwas #SardarPatel #SardarVallabhbhaiPatel #RunForUnity pic.twitter.com/GO6sWkM4HH

President Ram Nath Kovind and Union Home Minister Amit Shah also paid tribute to Sardar Patel in Delhi. In the capital, Shah flagged off the "Run for Unity" marathon with boxing champion Mary Kom handing over the flag. Thousands of people are expected to part in similar marathons in various parts of the country.

On Sardar Patel's birth anniversary two Union Territories - Jammu and Kashmir, and Ladakh - have come into existence. Jammu and Kashmir has officially been split into two Union Territories nearly three months after the central government scrapped its decades-old special status under Article 370. India's first Home Minister, Sardar Patel is credited for the merger of over 560 princely states into the Union of India.

PM Modi also visited a technology demonstration site and interacted with civil service probationers at Kevadiya. Since 2014, October 31 is observed as the National Unity Day.

The 182-metre-tall statue was inaugurated by Modi on the same date last year. Located on Sadhu-Bet Island, Gujarat, the statue occupies over 20,000 square meters and is surrounded by a 12 square km artificial lake.