New threats to India due to Afghanistan crisis: Rajnath Singh

Pakistan had understood that they would not make any gains from violations of ceasefire agreements, said Rajnath Singh 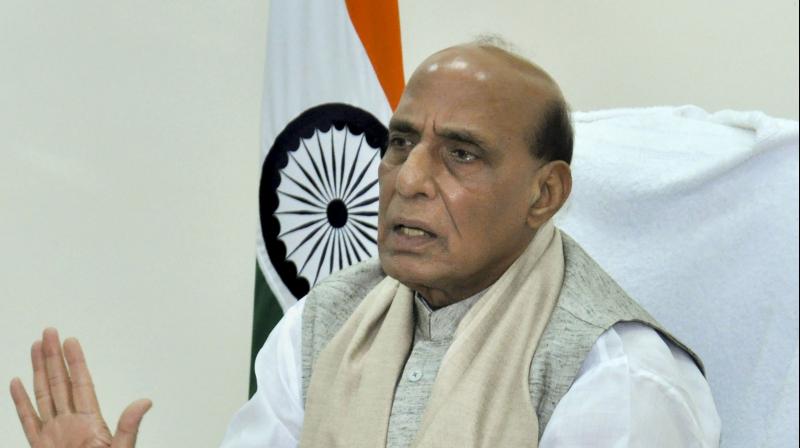 New Delhi: Defence minister Rajnath Singh on Monday said that the government does not want that anti-India forces take advantage of the evolving situation in Afghanistan to promote cross-border terrorism into the country.

Mr Singh said that what is happening in Afghanistan is raising new questions from the security point of view and India is constantly monitoring the situation there.

"Along with the security of Indians, our government also wants that anti-India forces do not take advantage of the evolving situation there to encourage cross-border terrorism," Mr Singh said while delivering a lecture on "National Security’ as part of late Balramji Das Tandon lecture series.

"Our government is alert and capable of facing any kind of situation," he said, and added that India is prepared to deal with any danger arising from anywhere — sky, water or land.

Mr Singh also said that there was a trust deficit between India and Pakistan and the country needed to be vigilant of this fact from the point of view of national security.

Mr Singh said Pakistan had understood that they would not make any gains from violations of ceasefire agreements.

An agreement was signed between the Director General Military Operations (DGMO) of India and Pakistan to maintain a ceasefire along the Line of Control in February this year, he said. "We are also in wait and watch mode because the trust deficit between both the nations is a major problem,” he said, adding that no ceasefire violation by the neighbouring nation has taken place ever since the agreement was signed.

Blaming the Chinese for the stand-off in Eastern Ladakh, the defence minister said that PLA troops ignored the agreed protocol last year which led to a military tussle.

"We cannot allow the Chinese Army to act on the LAC in a unilateral manner under any circumstances. We are not allowing it (currently). Nor we will ever allow it (in future)," said Mr Singh

The defence minister pointed out that while there are perceptional differences on the border with China, both armies had been patrolling the area following certain agreements and protocols.

"The government has clearly told the armed forces that any unilateral action on the LAC should not be ignored. That's what the Indian Army did on that day in Galwan and bravely confronted the PLA soldiers and forced them to retreat," said Mr Singh. "We will not compromise on India's border, its honour and self-respect. We will never allow the sanctity of borders to be disturbed," he said.

Mr Singh said there is now a belief in the armed forces that they can perform their duty with no interference of any kind. “There hasn’t been a major terrorist incident in the hinterland of India in the last seven years. This shows the increased morale and confidence of our Armed Forces,” he said.

“I believe that the remaining tentacles of terrorism in Kashmir will also end. I have this belief because the strength that the separatist forces used to get there due to Article 370 and 35A is over now,” he added.

"Today we can say that Pakistan-supported model of terrorism is getting demolished in India,” he said.

The defence minister laid stress on continuously upgrading and updating the national security system to face new challenges and said that some new threats have emerged because of the development of modern technology.

He referred to the dropping of two bombs using drones at the Jammu air force station earlier this year. "We have to continuously update and upgrade the national security system for new challenges,” he said.