Says Congress is still living in the past, unaware of future. 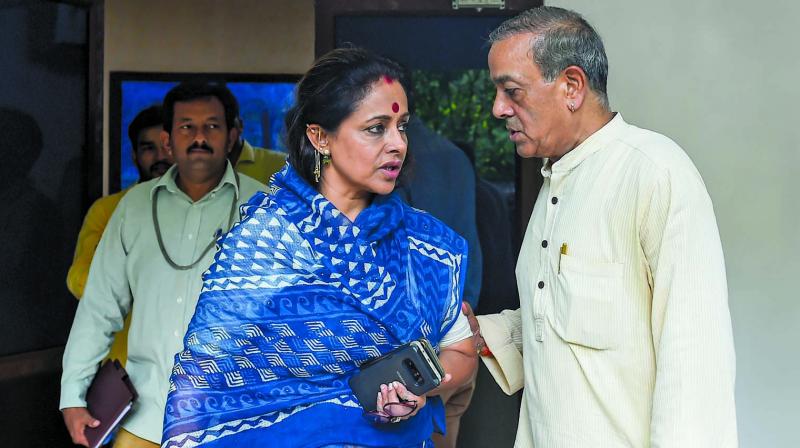 Sanjay Sinh, who resigned from the Rajya Sabha as well as the Congress, with his wife Ameeta Sinh at his residence in New Delhi on Tuesday. (Photo: PTI)

New Delhi: Rajya Sabha member Sanjay Sinh, who hails from the Amethi royal family, resigned from the Congress on Tuesday and said he would join the Bharatiya Janata Party (BJP) on Wednesday.

Addressing a press conference, Mr Sinh said, “The Congress is still in the past, unaware of the future. Today, the country is with Prime Minister Narendra Modi and if the country is with him, I’m with him. I will join BJP tomorrow. I have resigned from the party, as well as from the membership of Rajya Sabha”.

He added, “I have been with the Congress since 1984. My decision of leaving won’t impact Congress in any way. Whatever has happened in the Congress in 15 years hasn’t happened before. I took this decision after thinking a lot about it.”

Mr Sinh has also resigned from the membership of Rajya Sabha. He was elected on a Congress nomination from Assam. His term was to end in April 2020.  Rajya Sabha deputy chairman Harivansh announced in the House that his resignation has been accepted. He had unsuccessfully contested the recent Lok Sabha election from Sultanpur against BJP’s Maneka Gandhi.

In 2009 he had won Lok Sabha election on Congress ticket from Sultanpur. While his wife had been an MLA from Amethi. In 1998 Mr Sinh had contested from Amethi on a BJP ticket after which he switched to the Congress.

After his win in 2009 he was expecting to be appointed as a minister in UPA 2 but that did not happen. During the 2017 Uttar Pradesh Assembly elections he was keen to lead the Congress in the state instead he was appointed as the chief of the coordination committee and the post went to Raj Babbar.

It is expected that Mr Sinh will get a Rajya Sabha seat from the BJP after he joins the party.