The Congress and the NCP had won 42 and 41 seats, respectively. 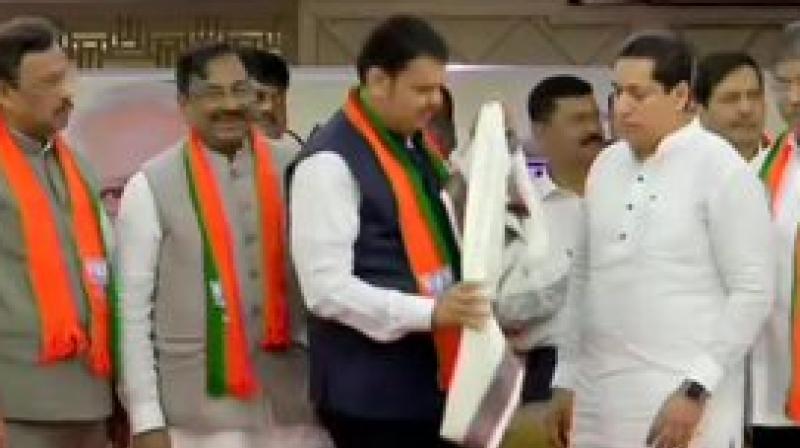 Mumbai: In a major blow to Opposition unity in Maharashtra, three MLAs from the NCP and one from the Congress joined the ruling BJP on Wednesday, a day after they tendered their resignations from the Legislative Assembly.

The BJP might field the four in the assembly elections due later this year, depending on how the seat-sharing deal between the BJP and ally Shiv Sena shapes up, sources in the saffron party said.

The three NCP MLAs who switched their loyalties are Shivendraraje Bhosale from Satara, Sandeep Naik from Airoli in Navi Mumbai, and Vaibhav Pichad from Akole in Ahmednagar district.

The lone Congress MLA is Kalidas Kolambkar from Wadala in Mumbai. The MLAs joined the ruling party in the presence of Chief Minister Devendra Fadnavis and state BJP unit president Chandrakant Patil on Wednesday morning.

Vaibhav Pichad's father and former state tribal development minister Madhukar Pichad, also attended the function. Pichad senior enjoys good relations with Congress turncoat and current Housing Minister Radhakrishna Vikhe Patil of the BJP. "Pichad and Kolambkar have generally contested against Shiv Sena candidates in past elections, except in 2014, when the Sena and the BJP had contested separately in all the 288 assembly seats," a BJP leader said. Sandeep Naik is the son of NCP strongman and former minister from Navi Mumbai, Ganesh Naik.

Kolambkar, a seven-term lawmaker at present, was originally with the Shiv Sena before joining the Congress. Bhosale, who belongs to the royal house of Chhatrapati Shivaji, is locked in a turf war in Satara with his cousin Udayanraje Bhosale, the NCP MP from Satara.

The Sharad Pawar-led Nationalist Congress Party (NCP) has been hit by a string of desertions with many party leaders either joining the BJP or the Shiv Sena. On Sunday, Pawar accused the ruling BJP of misusing probe agencies and state-run financial bodies to compel the opposition leaders to join their fold.

The MLAs and other leaders who quit the Congress and the NCP have taken the stand that they were joining the BJP or Sena to ensure development of their constituencies.

Senior BJP leader and Maharashtra Water Resources Minister Girish Mahajan recently claimed that at least 50 MLAs of the Congress and the NCP were in touch with the BJP to switch over ahead of the polls. In the 2014 elections, the BJP won 122 seats and the Shiv Sena 63. The Congress and the NCP had won 42 and 41 seats, respectively.