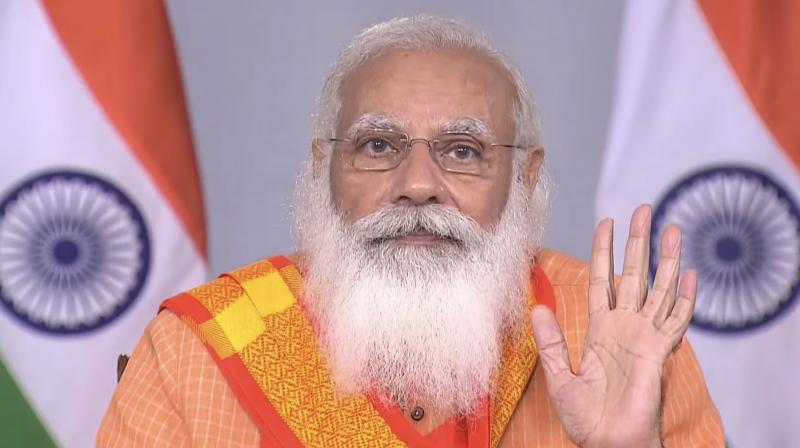 Prime Minister Narendra Modi on Sunday said the nation followed the mantra of sabka saath, sabka vikas, sabka vishwas and that India now moves ahead not under the pressure of other countries but with its own convictions. (Photo: PTI)

New Delhi: As the BJP-led NDA government completed seven years in office amid India grappling with the second wave of the Covid-9 pandemic, Prime Minister Narendra Modi on Sunday said the nation followed the mantra of “sabka saath, sabka vikas, sabka vishwas” and that “India now moves ahead not under the pressure of other countries but with its own convictions”.

On a day the ruling BJP held welfare programmes across the country to mark the second anniversary of the NDA government’s second term as “Sewa Divas”, with party president J.P. Nadda flagging off Covid relief material for Delhi, the Opposition parties claimed the Narendra Modi government had proved to be the “weakest government in the country in the last 73 years”, saying that the government had given the country “unmeasurable pain” as it listed unemployment, petrol prices, inflation, the farmers issue and “mismanagement of the Covid crisis”, among other issues, to attack the government.

Prime Minister Modi, asserting that India was “fighting Covid-19 with all its might”, on Sunday spoke to a number of people ranging from those engaged in transporting medical oxygen to lab technicians, and said the nation’s resolve to prevail over the virus was equal to the magnitude of the challenge it faces.

In his monthly “Mann ki Baat” radio address, Mr Modi noted that the nation also faced several natural disasters, including cyclones, landslides and earthquakes during the pandemic, and said more lives were saved than in the past with the Centre, states and local administrations coming together to carry out relief and rescue operations.

With the demand for medical oxygen rising hugely during the recent surge in Covid-19 cases and many states and hospitals complaining of its shortage, the PM said the production of the liquid medical oxygen had risen by over 10 times to nearly 9,500 MT daily from 900 MT earlier.

“The demand for oxygen surged all of a sudden. This was a very big challenge and delivering medical oxygen to remote parts of the country was indeed a huge task”, he said, noting that many plants manufacturing industrial oxygen were located in the eastern parts of the country and lauded those, including cryogenic tanker drivers, the oxygen express (train) crew and Air Force pilots, involved in its transportation.

In New Delhi, many BJP leaders, including Union ministers, lauded the Modi government on its seventh anniversary, with home minister Amit Shah claiming the country had made “unprecedented achievements” in the fields of security, public welfare and reforms under NDA rule. He insisted that the people have “consistently expressed their unwavering faith” in the PM’s “service and dedication”.

The BJP had already told its leaders and chief ministers not to hold any celebratory event in the wake of the ongoing Covid-19 crisis, and instead hold welfare events, including in one lakh jhuggi clusters across the country. “The achievements of the past seven years have been those of the nation and its people… together we experienced so many moments of national pride… India now moves ahead not under the pressure of other countries but with its own convictions… it makes everyone proud,” said the PM in his “Mann ki Baat” address.

When India does not compromise on the issues of national security, when the strength of our armed forces increases, we feel that yes, we are on the right path,” Mr Modi said. He further said that many old disputes had also been resolved with complete peace and harmony, and a new confidence underpinned by peace and development has arisen from the Northeast to Kashmir.

BJP president J.P. Nadda said the nation has been moving towards the path of becoming “atma nirbhar” under the Modi government.

In a series of tweets in Hindi, home minister Amit Shah credited Mr Modi for improving the living standards of the poor, farmers and deprived sections by bringing them into the mainstream with his determined, holistic and welfare policies and making India a powerful nation with his strong leadership. “The Modi government has presented a unique example of unparalleled coordination of development, security, public welfare and landmark reforms,” he said.

Defence minister Rajnath Singh said India “wrote a new chapter in the field of social welfare, development, good governance” under the Modi government and the PM and the government was guided by the mantra of “sabka aaath, sabka vikas, sabka vishvas”.