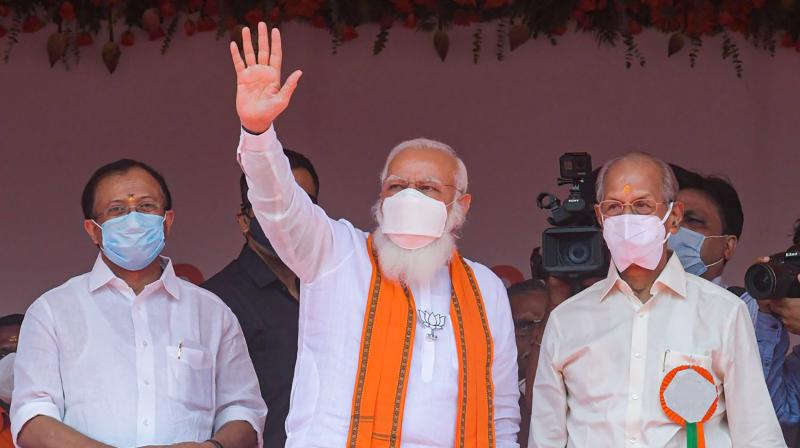 THIRUVANANTHAPURAM: Prime Minister Narendra Modi on Tuesday hit out at the CPI(M)-led LDF government in Kerala, accusing it of betraying people in the manner in which Judas deceived Jesus Christ.

Addressing his first election meeting in Kerala which goes to polls on April 6, the Prime Minister said if Judas deceived Jesus for a few silver coins, the Pinarayi government betrayed the people for gold, referring to the gold smuggling case involving the chief minister’s former principal secretary.

Mr Modi also raised the Sabarimala issue accusing the LDF government of unleashing lathis on innocent devotees who were fighting for the protection of traditions, customs and rituals. He was referring to the agitation of Hindutva outfits, including the BJP, which protested against the LDF government's decision to implement the Supreme Court verdict on allowing women of all ages in the hill shrine.

The Sabarimala temple customs prohibit the entry of women between the age of 10 and 50.

"I want to tell the LDF and UDF if you abuse our culture we will not remain silent spectators. Our state president Surendranji was arrested and ill-treated by the Kerala government. What was his crime? That he spoke for Kerala’s traditions?" Mr Modi asked.

He hit out at the Congress-led UDF for remaining silent when devotees were being attacked by the police. “I am proud to belong to a party that has, is always and will always defend the culture of our land," he said.

Mr Modi solicited votes for 11 BJP candidates contesting from the district, including Metroman E Sreedharan, who is in the fray from Palakkad constituency. “The BJP would offer a vision to Kerala which would be different. Metroman Sreedharanji, a man who has done excellent work to make modern India and improve connectivity, a man admired by all sections of society, has devoted himself to Kerala’s progress,” he added.

The Prime Minister came down heavily on the CPM over politics of violence. He said despite being in power for so long, some junior level leaders behave like anti-social elements. Political rivals are killed with their blessings.

He said if the BJP came to power it would bring an end to the saga of political violence. "Differences in the political sphere are normal. But killing the opponents in the name of ideology is not acceptable. So many of our young BJP karyakartas have lost their lives,” he reminded the gathering.

The Prime Minister accused the LDF and UDF of playing friendly matches for so many years. However, this match-fixing is not going to last long, he added.

"A major shift is being witnessed in Kerala politics over the past five years. This shift is driven by the aspirational youth especially the first time voter who wants a change," he said.

The BJP, which had just one MLA in the outgoing Assembly, is making all efforts to increase its tally this time. The party has fielded its top leaders besides two film stars to wrest seats from the UDF and LDF. In the last Assembly elections, the BJP-led NDA had scored close to 15 per cent votes.