PM to address via video conference, booths set up at 500 locations

The Prime Minister will address the biggest town hall programme at the Talkatora Stadium at 5 pm on Sunday. 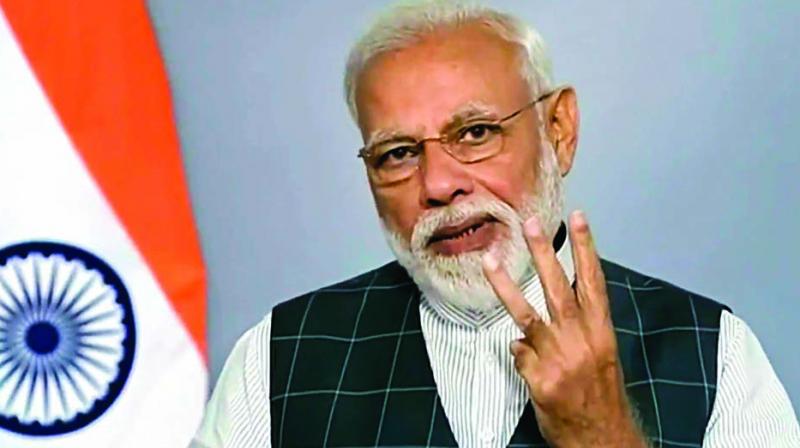 Prime Minister Narendra Modi on Sunday will interact with people, who have pledged their support to the 'Main Bhi Chowkidar' campaign in all parliamentary constituencies on Sunday. (Photo: File)

New Delhi: Prime Minister Narendra Modi on Sunday will interact with people, who have pledged their support to the 'Main Bhi Chowkidar' campaign in all parliamentary constituencies on Sunday.

The Prime Minister will address the biggest town hall programme at the Talkatora Stadium at 5 pm on Sunday. As many as 5,000 people are expected to attend the town hall.

Taking to the Twitter, Prime Minister wrote: "The day we were most looking forward to is here! At 5 pm, lakhs of Chowkidars from different parts of India will interact in the historic Main Bhi Chowkidar programme. This is an interaction you must not miss."

Expressing confidence that vibrant professionals especially youngster will facilitate 'Main Bhi Chowkidar' campaign with their presence, Prime Minister said: "These professionals energise and strengthen India. It is their hard work that is powering the rise of a New India in the 21st century."

'Main Bhi Chowkidar' campaign was launched on March 16 by Prime Minister Modi. A day after the launch, the Prime Minister, as well as a number of BJP leaders across the country, added the prefix ‘chowkidar’ to their Twitter handles as a mark of support to the poll campaign.

On March 20, Prime Minister Modi had addressed over 25 lakh chowkidars from across the country via audio conference. He also launched a scathing attack on the opposition party’s 'Chowkidar Chor Hai' campaign.

The origin of the word 'chowkidar' dates back to the poll campaigning ahead of the 2014 general elections when Modi had promised to work as a 'chowkidar' to guard the people's money and their trust once elected to the top office.

'Main Bhi Chowkidar’ has been started after extensive surveys and data analysis by BJP strategists who feel that Congress president Rahul Gandhi’s 'chowkidar chor hai’ jibe and campaign is not resonating among people. The surveys also suggested that it is actually angering people in the country, according to a release.

A similar strategy was adopted by the BJP ahead of the 2014 general elections, wherein the party turned around senior Congress leader Manishankar Aiyar’s "chaiwallah" jibe into a mass campaign.

This campaign is expected to drive the narrative of the Prime Minister’s strong and decisive image which multiple surveys have conveyed is the main factor in the upcoming elections, the release mentioned.

Under the aegis of this campaign, the BJP has leveraged a tech innovation called conversation cards on Twitter, whereby people will get a personalised message from the Prime Minister on Twitter on participating in this campaign.