India   Politics  31 Mar 2019  Balakot air strikes carried out by our jawans, not by me: PM in Delhi event
India, Politics

Balakot air strikes carried out by our jawans, not by me: PM in Delhi event

Modi also portrayed his love for the country above the political interests. 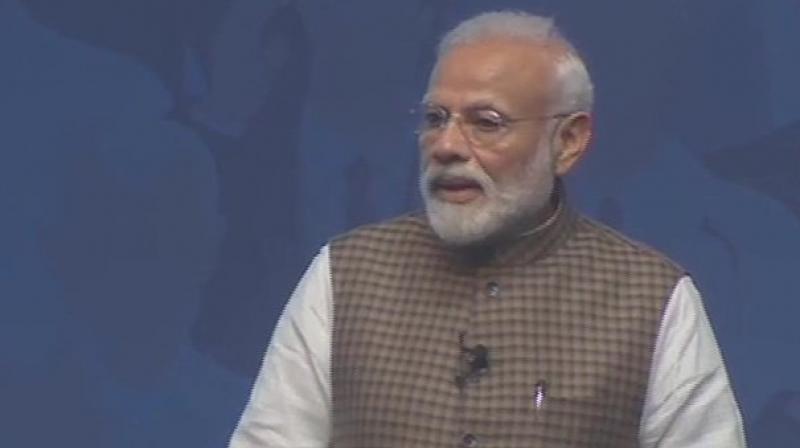 'We've been told Balakot area is being reconstructed by Pak to show people that no terror camp existed,' said Modi. (Photo: ANI)

"Pak is in dilemma, if they say something happened in Balakot, they'll have to accept, ‘yes, we had terrorist camps operating here.’ They kept telling the world, there's nothing, we attacked the place they can't hide anymore. They haven't let anyone visit it in the last 1.5 months."

Announcing inside news on Pak's action after the aerial strike, Prime Minister said, "We've been told Balakot area is being reconstructed by Pak to show people that no terror camp existed."

Modi mentioned that from the past 40 years, India had suffered from terrorism and we know who is responsible for it. Hence he took the decision for the Indian Air Force to conduct Balakot air strikes as he thought that "the game" should be played from where terrorism is being controlled.

However, Modi also said "Balakot air strikes were carried out by our country's jawans, not by me. We salute them."

Modi took the platform to honour the valour of Indian armed forces.

"I have complete trust on the armed forces. I have trust in their ability and disciple and what they can achieve."

Modi also portrayed his love for the country above the political interests.

"Pak has started opening airspace after air strikes, believing Modi is busy with elections but country more important for me," Modi added.

Prime Minister also took the platform to attack the opposition.

"Those who are abusing Modi on Balakot airstrikes are helping Pak with their statements."

Taking a jibe at the financial offender Nirav Modi, Prime Minister said, "Some people (Nirav Modi) go overseas and say the condition of Indian jails are not suitable for their stay...So what we should do, give them a palace?... I can't give them a better jail than the one in which Britishers imprisoned Gandhiji."

At the event, Modi also gave away the ideological line of the BJP's prominent electoral campaign.

Modi said, "for me, chowkidar is representative of Mahatma Gandhi's concept of trusteeship."

The program was broadcasted across India at 500 places where gatherings of BJP workers, professionals, chowkidars (Watchmen), traders, farmers among others were present to listen and interacted with Modi through video-conferencing.

Tensions between India and Pakistan escalated after Indian Air Force fighter jets bombed terror group JeM's training camp near Balakot deep inside Pakistan on February 26. Pakistan retaliated by attempting to target Indian military installations the next day. However, the IAF thwarted their plans. The Indian strike on the JeM camp came 12 days after the terror outfit claimed responsibility for a suicide attack on a CRPF convoy in Jammu and Kashmir's Pulwama in which 40 soldiers were killed.