Modi said the demonetisation would deliver a “multiplier effect” to clean up the economy in the long term. 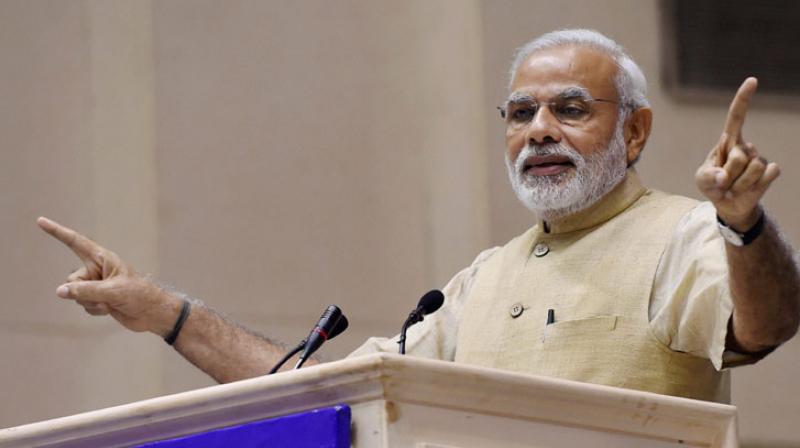 New Delhi: Prime Minister Narendra Modi on Thursday accused the Congress leadership of “desperation” in the face of his “tough” demonetisation decision, and said that it was the first time that a concerted effort was made by the Opposition to “openly” protect the dishonest through disruptions in Parliament.

Mr Modi, in an interview to an English magazine, asserted that while the honest would not be harassed, those with black wealth had “only a few days to hide” before they were punished. Issuing the “most dire warning” to black marketeers and the corrupt, Mr Modi said “if the enemy runs, we will chase them. If they change their tactics, we will change ours. When the corrupt find new methods of cheating, we will identify new methods to clamp down on the same.”

The PM also slammed his predecessor Dr Manmohan Singh, who had described the demonetisation move as “monumental mismanagement” and “organised loot”. Mr Modi said his predecessor might have been referring to the “unending string of scams” like 2G, CWG and coal block allocation “under his leadership”.

He said, “I pity a few of our opponents, especially the Congress leadership, for the desperation they have been exhibiting... Congress leaders are entirely pre-occupied with only one thing — elections... There is nothing political in the demonetisation decision... It was a tough decision taken to clean up our economy and our society. If I were guided by short-term electoral politics, I would have never done so.”

The demonetisation issue led to a complete washout of the recent Winter Session of Parliament. Mr Modi said the government tried its best to keep Parliament functioning.

“I was keen to speak in both Houses. Yet, there was a concerted attempt by the Congress to derail the functioning of the Houses rather than have a proper debate. While opposition in Parliament is understandable, this is the first time it is being used to protect the dishonest and that too so openly,” the Prime Minister said.

On Dr Singh’s criticism on demonetisation, Mr Modi said, “It is interesting that the words ‘monumental mismanagement’ come from a leader who has been at the helm of India economic journey for around 45 years.”

He said, “Demonetisation on the other hand is an unprecedented step to confiscate the loot of the corrupt.”

Mr Modi said before the Winter Session, he had suggested that there should be discussion in Parliament on reform of the political system and electoral reforms but this could not happen due to disruptions.

Rejecting criticism that the demonetisation decision was political, Mr Modi said it was taken not for “short-term windfall gains” but for long-term structural reforms.

Asserting that his government has “zero tolerance for corruption”, he said the dishonest will be punished and the taxes collected from them will be routed for welfare programmes.

He said the demonetisation would deliver a “multiplier effect” to clean up the economy in the long term.

Regarding the frequent modifications after demonetisation was announced on November 8, the PM said, “One must be able to distinguish between ‘niti’ (policy) and ‘ran-niti’ (strategy) and not put them in the same basket.”