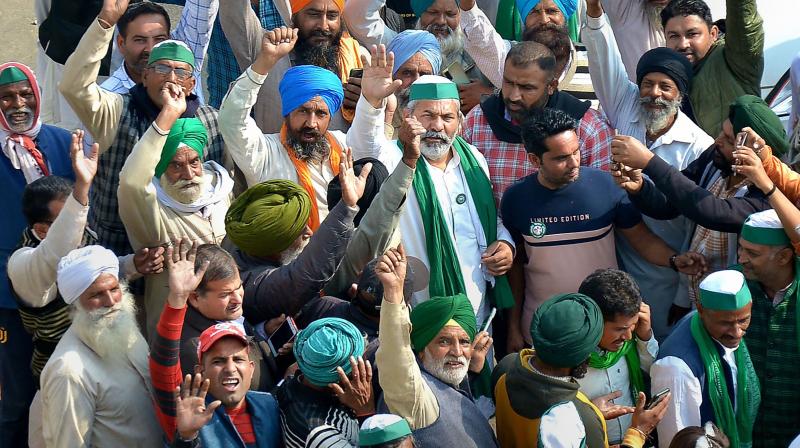 Bharatiya Kisan Union (BKU) Spokesperson Rakesh Tikait reacts after a bill to cancel the three contentious farm laws was passed during the Winter Session of the Parliament, in Ghazipur, Monday, Nov. 29, 2021. (PTI Photo)

New Delhi: Bharatiya Kisan Union (BKU) leader Rakesh Tikait on Monday said that the farmers won’t leave the protest sites on Delhi’s borders unless there is a discussion on a legal guarantee on Minimum Support Price (MSP) for crops and other issues.

Terming the repeal of the farm laws in Parliament as a victory of the protesters, the farmer leaders from Punjab said an emergency meeting of the Samyukt Kisan Morcha will be held on Wednesday to decide their future course of action.

Referring to their six demands, including the withdrawal of cases against the farmers and compensation for those who died during the agitation, the leaders of the farmers’ unions from Punjab said at a press meet at the Singhu border on Monday that the Centre had time till Tuesday to reply.

“The Centre has time till tomorrow (Tuesday) to reply to our demands. We have called an emergency meeting of the SKM Wednesday to discuss the future course of action,” a farmer leader said.

Mr Tikait said the government wants there should be no protests in the country, but farmers will not leave the protest site before any discussion on MSP, and other issues.

Asked about the passing of the Repeal Bill in Parliament, Mr Tikat said: “It is a tribute to all 750 farmers who lost their lives in the agitation.” He said that with a solution found for the three farm laws, the Centre should now talk about the damage that was done in the past year. “The issue will not end if the Centre wants to settle the matter with deceitful, false statements.”