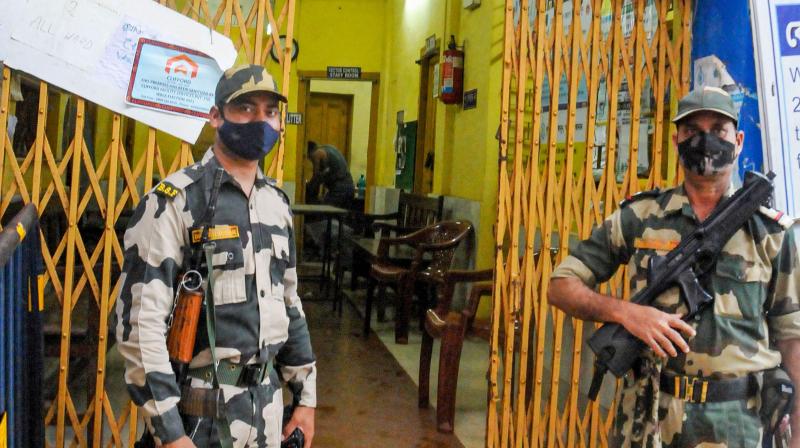 Paramillitary jawans stand guard at a polling station on the eve of Bhabanipur constituency by-polls, in Kolkata, Wednesday, Sept. 29, 2021. (PTI)

Many roads of the constituency, where young BJP leader and lawyer Priyanka Tibrewal is standing against Ms Banerjee, were found under water, slowing traffic till the afternoon. This has posed a question how voters will step out of their homes Thursday to exercise their franchise amid the forecast of another spell of heavy rain.

The weather forecast also threw senior TMC leaders into worry. Fearing a low turnout of voters at the polling booths on Thursday and its impact, they swung into action to restore normalcy on a war footing. The leaders included outgoing Kolkata mayor Firhad Hakim.

He said: “The rainfall was recorded at around 100 mm. Water will recede within four-five hours as soon as the rain stops. Altogether, 13 pumping stations are working. A heavy-duty pump was also brought from Howrah for use.”

On the difficulties faced by Bhowanipore’s voters, the state transport minister added: “People will be able to cast their votes. It’s our challenge to pump out water from low-lying areas like Ward 70 and Alipore.”

But his colleague in the Kolkata Municipal Corporation’s board of administrators, Tarak Singh, who is in charge of the civic sewerage and drainage, said: “Water should have receded according to our system. But the system is failing.”

The Election Commission, which is closely monitoring the situation, also offered assistance to voters if they face difficulties. It was suggested they could contact the EC on its website so it could organise pick up and drop facilities for them to reach the booths and return home, sources said. Each booth will also be provided with a pump to drain out water.

Like Bhowanipore, two more seats, earlier won by the TMC in the state, will go for Assembly polls Thursday. These are Shamshergunj and Jangipur in Murshidabad, which have a high Muslim population. The Assembly polls in these seats were earlier deferred after two candidates died of Covid-19 in April.

At Jangipur, a state police constable, Tarun Mondal, 44, who was on poll duty, was found lying unconscious at Dhuliyan Municipality guest house under mysterious circumstances in the morning. He was from Balurghat in South Dinajpur. He was rushed to Jangipur Hospital, where he died later. The body has been sent for post-mortem.

Former TMC minister Zakir Hussain, who is contesting from Jangipur, is believed to have an edge over Sujit Das of the BJP. Shamshergunj is, however, likely to witness a close fight between Jaidur Rahman of the Congress and Amirul Islam of the TMC.