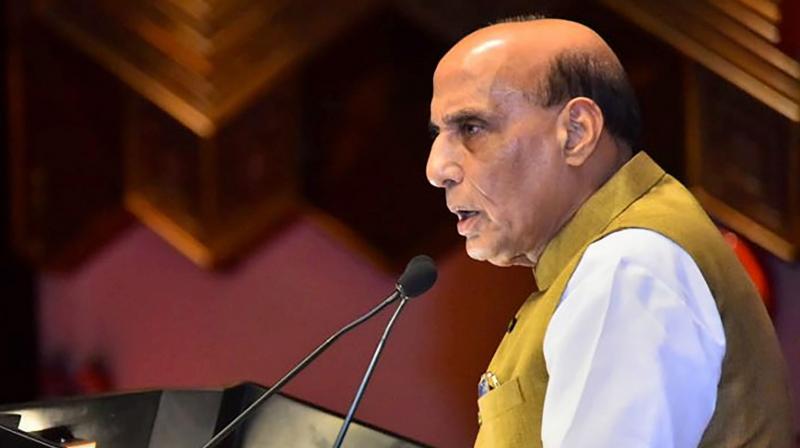 New Delhi: Defence minister Rajnath Singh said on Sunday that the changing power equations in Afghanistan, with the Taliban in control of Kabul and most of the rest of the country, was a key challenge for India, requiring it to do a major rethink of its defence and security strategy, underscored by its Quad initiative.

“The changing equation in Afghanistan is a challenge for us... These situations have forced our country to rethink its strategy. We are changing our strategy and the formation of the Quad underlines this strategy,” Mr Singh said while addressing the Defence Services Staff College (DSSC) at Wellington in Tamil Nadu.

Mr Singh said the defence ministry was seriously considering the formation of Integrated Battle Groups (IBGs) as quick decision-making is a key aspect during wartime.

He said that if the ceasefire with Pakistan was successful today, it was only because of India’s strength. India, he said, had changed its mindset towards terrorism to a proactive approach.  “In 2016, cross-border strikes changed our reactionary mindset into a proactive mindset, which was further strengthened by the Balakot airstrike in 2019,” Mr Singh said. He said that despite the challenges at the border, countrymen today were confident that there will be no comprise with India’s national security. “India will terminate terrorism from its land and if needed to go to another soil to terminate terrorism from there India will not hesitate. We can attack from our soil and if needed we can attack on their land too. This capability has been developed in India,” the defence minister said, adding that this defines the “new era” of India’s national security.

Referring to the standoff with China in Ladakh, he said in the northern sector too, a unilateral attempt was made to change the status quo on the border last year. There too, Mr Singh said, “we faced our adversary with a new dynamism” and foiled their plans.

“Our soldiers displayed bravery as well as restraint, when required,” the defence minister said. “During the India-China border standoff, when the Chinese forces were trying to march ahead, I spoke to the Army Chief around 11-12 at night… The situation was very critical. In that situation too, the way our forces behaved prudently is commendable,” he added.

“With this, our security forces once again proved that we are committed to facing any enemy anytime and in any situation, to ensure our national security, regardless of the cost,” said Mr Singh.

The minister said the government was also considering a major military reform initiative, “Tour of Duty”, which would be a game-changer as it would help reduce the average age of the military and make it more agile. Listing some of the reforms which he said was for the future, the defence minister said the appointment of the Chief of Defence Staff and the setting up of the department of military affairs would go a long way in continuously bolstering the security infrastructure. “The decisions have directly linked our armed forces to governance as they now have direct involvement in all processes. The appointment of the CDS has provided stability to the Joint Chiefs of Staff Committee as there is a permanent and single-point adviser to the government on major issues of defence and security,” he said.

On the creation of joint commands, Mr Singh said it was another major structural reform, the progress of which was progressing rapidly, he said. “With the formation of Integrated Theatre Commands, the armed forces will have to develop integrated operational concepts and doctrines to fight jointly. I think that the DSSC can prove to be a good platform for brainstorming on this issue,” he added.