The family of the rape survivor on Tuesday had launched a protest outside KGMU trauma centre, seeking punishment for BJP MLA Kuldeep Sengar. 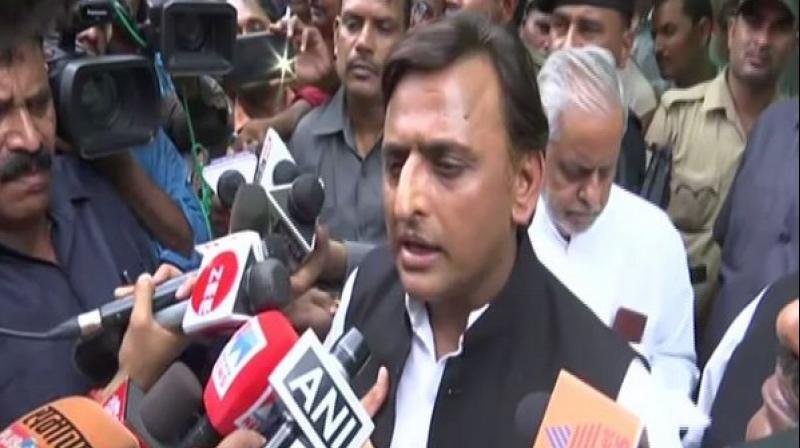 The former Chief Minister also demanded constitution of a special investigation team headed by a sitting judge to probe into the road accident of Unnao rape case victim. (Photo: ANI)

Lucknow: Samajwadi Party president Akhilesh Yadav on Tuesday appealed to Yogi Adutyanath government to come forward and fulfil the demands of the family of the Unnao rape survivor who is currently being treated in King George's Medical University trauma centre here.

Speaking to reporters outside KGMU trauma centre, Yadav said, "The government should come forward to help and fulfil the demands of the girl's family as the people of Uttar Pradesh had huge expectations when they elected them. It is the responsibility of the government to ensure that none of its citizens are suffering."

The family of the rape survivor on Tuesday had launched a protest outside KGMU trauma centre, seeking punishment for BJP MLA Kuldeep Sengar.

The former Chief Minister also demanded constitution of a special investigation team headed by a sitting judge to probe into the road accident of Unnao rape case victim.

"Uttar Pradesh has given the prime minister and the president to this nation. Even the Union Home Minister was present in the state when this incident took place. If she does not get justice now, then when will she?" Yadav added.

Akhilesh Yadav was also asked about recent reports which alleged that the truck involved in the accident belonged to SP members.

"This government can say and do anything they want. In this incident, they are saying that the truck belongs to SP, in Sonbhadra, they were taking the name of Nehru. It is your government who is not registering the complaints of people and it is your police in whose custody, people are getting killed", Yadav said.

On Sunday, the Unnao rape survivor was on her way to Rae Bareli, a truck rammed into her vehicle in which she was travelling with her two aunts and lawyer.

While her aunts succumbed to injuries, she and her lawyer were grievously injured.

The state police has registered a murder case against BJP MLA Kuldeep Singh Sengar, his brother Manoj Singh Sengar and eight others in connection with the road accident. Sengar is the prime accused in the rape case of the minor girl.

He is a BJP MLA from Bangarmau in Unnao and was arrested by the CBI in April last year.

The teen was allegedly raped by the MLA at his residence in Unnao on June 4, 2017, where she had gone seeking a job.

Since after the accident, the Unnao rape survivor and her lawyer are currently being treated at a Lucknow hospital, and their condition is said to be critical.