Harish Saholiya, the jeweller told ANI that they have made three mementos from pure gold and silver on three different themes. 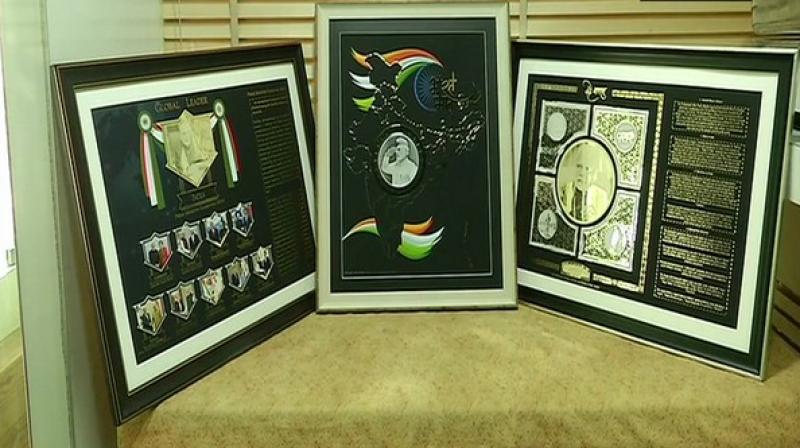 Harish Saholiya, the jeweller told ANI that they have made three mementos from pure gold and silver on three different themes. "Our first frame shows India as 'sone ki chidiya.' It is Modi ji's dream of making India again sone ki chidiya. From Kashmir to Kanyakumari we have made the country with gold and in the middle of the map have placed the image of Prime Minister Modi saluting. The slogan Bharat Mata ki Jai is also inscribed on the frame."

"My second frame has all the images of world leaders whom the Prime Minister have met. I chose this theme as the world got attracted to India after PM Modi came to power. My third frame is based on Swach Bharat Abhiyan and the soldiers who lost their lives in the terror attack," he added.

Saholiya further told ANI that before the elections were declared they were confident that Prime Minister Modi will again come back to power and thus, started making these frames. "Now that the results have been announced, we will try to get an appointment from PMO so that we can present these mementos to the Prime Minister," he added.

Prime Minister Narendra Modi's oath-taking ceremony for the second consecutive term will be held on Thursday at Rashtrapati Bhawan in New Delhi. President Ram Nath Kovind will administer the oath of office and secrecy at the function.

Top leaders and guests have also been invited from around the world and across the nation to attend Modi's swearing-in.