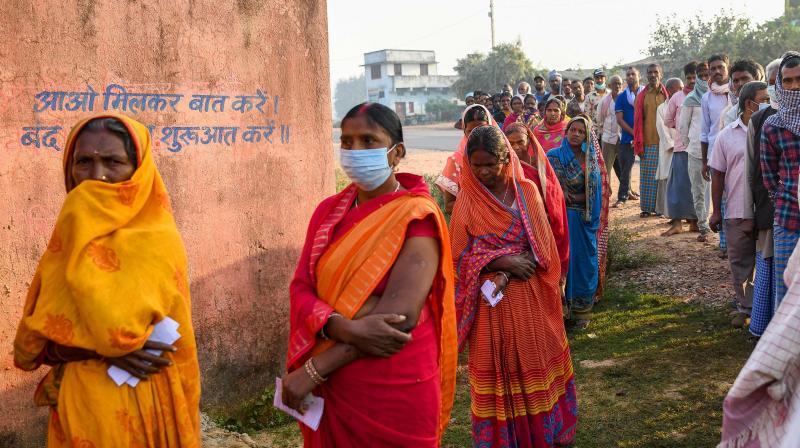 The results of a majority of the exit polls predict that Trinamul Congress’ Mamata Banerjee has a hurricane edge that could make her retain power for the third time in West Bengal. (Representational Photo: AFP)

New Delhi: The results of a majority of the exit polls predict that Trinamul Congress’ Mamata Banerjee has a hurricane edge that could make her retain power for the third time in West Bengal, while the BJP-led NDA will be a key player in the state, giving a robust challenge to the TMC. The DMK led by M.K. Stalin is projected to sweep to power in Tamil Nadu, replacing the AIADMK. The Left Democratic Front is expected to retain power in Kerala, breaking the cyclic nature of the state. The BJP is tipped to retain power in Assam and also coming to power in Puducherry as part of a coalition, in place of the Congress.

In West Bengal, most of the surveys predict that the ruling TMC will win at least around 150 seats, with the BJP putting up a formidable fight. The C-Voter survey data projects the TMC with emerge victorious, with 152 to 164 seats in the state, where a total 292 Assembly constituencies went to the polls. The BJP was projected to get 109-121 seats, and the Congress-Left-ISF alliance 14-25 seats. In the 2016 Assembly polls in the state, the TMC had won 211, the BJP had secured three seats and the Left and Congress had cornered 76 seats.

The Axis exit poll predicts an extremely close finish – with the TMC winning 130-156 seats and the BJP winning 134-160 seats. The survey further states that the voteshare of the TMC is 44 per cent while that of the BJP is 43 per cent.

In Tamil Nadu, the DMK led by M.K. Stalin is expected to make a clean sweep, with all exit polls predicting a landslide for the DMK. This is the first Assembly election being held after the death of political stalwarts J. Jayalalithaa and M. Karunanidhi, and it is expected to witness the return of the DMK-Congress alliance to power with a clear majority. Voting for the 234-seat Tamil Nadu Assembly was held on April 6 in a single phase. The survey data shows that a combination of 10-year anti-incumbency and the absence of a charismatic successor to J. Jayalalithaa is expected to lead to an electoral setback for the ruling AIADMK-led coalition. The C-Voter survey shows that DMK-led alliance might secure 160 to 172 seats in the state, which has 234 Assembly constituencies. The ruling AIADMK-led alliance is expected to be restricted to 58 to 70 seats. The Axis exit poll shows the DMK+ may get 175-195 seats and AIADMK+ to secure 38 to 54 seats.

In Kerala, it is a straightforward electoral battle between the incumbent Pinarayi Vijayan-led Left Democratic Front (LDF) and the Congress-led United Democratic Front (UDF). According to the exit polls, the ruling LDF is expected to retain the southern state and thus buck the trend of the UDF and LDF alternating in power every five years. Kerala went to the polls on April 6 to elect 140 legislators. According to the C-Voter survey, the LDF may get 71-77 seats and the UDF 62-68 seats. The Axis survey shows 104-120 seats for the LDF and 20-36 seats for the UDF.

The BJP is all set to retain power in Assam, according to all the exit polls. The party is ahead in all exit polls so far even after it faced protests over the CAA and NRC. The C-Voter survey projects 58 to 71 seats for the BJP-led NDA and 53 to 66 seats for the Congress-led UPA. The Axis poll predicts 75-85 seats for the NDA and 40-50 seats for the UPA. Assam has a 126-member Assembly.

The exit poll data shows the NDA winning in the Union territory of Puducherry, with an almost two-thirds majority. The exit polls projected 19 to 23 seats for the NDA, comprising the AINRC, BJP and AIADMK. The Congress and DMK, which constitute the UPA, are projected to win eight to 10 seats.

If the exit polls predictions hold on counting day, May 2, it will be a big relief for the BJP, with the party making gains in West Bengal, retaining power in Assam and winning Puducherry. The Congress will have a lot to worry about as it could not win back power in Assam and in Kerala, that is now the state which party leader Rahul Gandhi represents in the Lok Sabha. Despite that, however, his party could not make a comeback in the southern state.