Mayawati also said that the Congress is no different from the BJP as they both misuse power and resources. 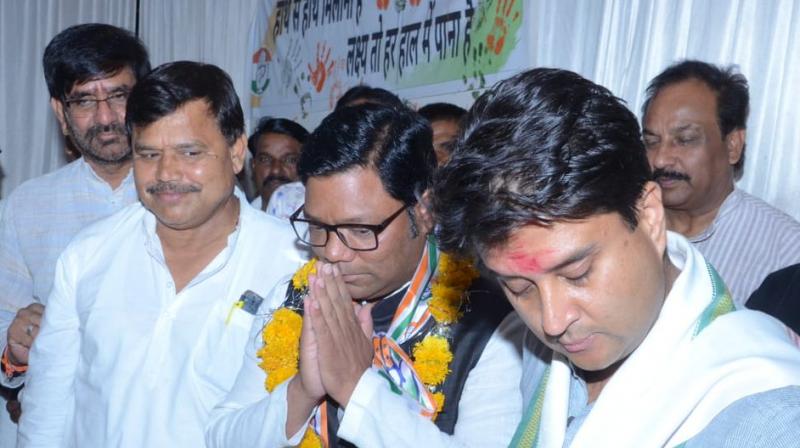 Bhopal: Bahujan Samaj Party chief Mayawati has hit out at the Congress after the SP-BSP candidate from Guna in Madhya Pradesh has joined the party.

Lokendra Singh Rajput of BSP, who was SP-BSP’s candidate against Jyotiraditya Scindia of the Congress, has come out in support of his opponent.

Jyotiraditya Scindia had welcomed Lokendra Rajput in the Congress yesterday.

Mayawati vented her anger out on Twitter suggesting that she would reconsider the support given to the Congress in Madhya Pradesh. The state government in Madhya Pradesh led by Kamalnath would lose two BSP MLAs if Mayawati withdraws her support.

This would bring the tally of the Congress led government down to 118 in the state. Also, in case the Samajwadi Party follows the suit, the figure would stand at 117 shaking the government’s existence.

The party needs to safeguard 116 seats in the 230-member assembly to continue to be in the government. At present, the Congress has support of two BSP MLAs, one SP MLA and four independents.

The Congress had won 114 seats in the elections held in the last year out of which Chhindwara MLA Deepak Saxena has resigned to pave way for Kamalnath to contest the by-election.

Mayawati also said that the Congress is no different from the BJP as they both misuse power and resources hinting that Rajput was forced to join the Congress.

Scindia is contesting from Guna constituency for the fiffth time after he won the by-election in 2002. Guna will vote on May 12.