In Rajasthan, BJP banks on Modi to win back its lost ground

The BJP is pinning its hope on the Modi factor to bounce back in Rajasthan and secure maximum possible seats in Lok Sabha polls. 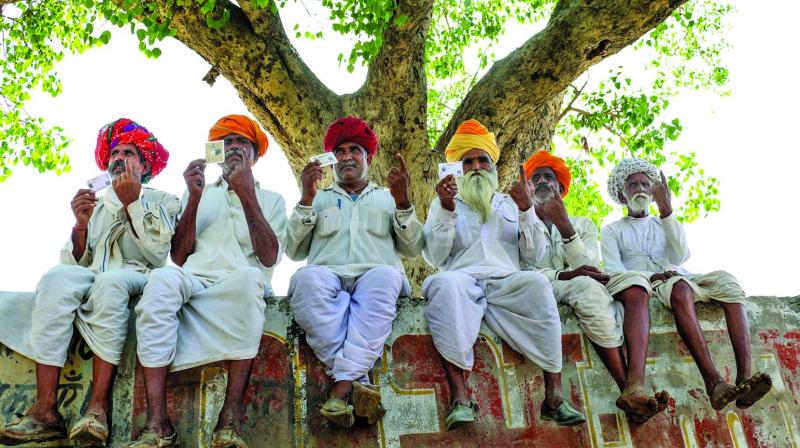 Voters show their voters identity cards and ink-marked fingers after casting their votes during the fourth phase of Lok Sabha elections in Ajmer on Monday. (Photo: PTI)

Jaipur: In a bid to maintain pressure on Congress in Rajasthan, that has recently wrested the state from BJP, Prime Minister Narendra Modi will hold a rally on May 1 as a show of strength for the party in Jaipur.

With voting for Lok Sabha polls in half of Rajasthan already over on Monday,  the party has embarked upon a show of strength and massive public contact exercise aimed at reaching out to the masses and regain lost ground ahead of the second phase scheduled for May 6.

The rally, scheduled to take place in the state capital will be addressed by BJP’s star campaigner Prime Minister Narendra Modi, in which candidates from several nearby Lok Sabha constituencies will also be presented before the people. According to party sources,  the rally will be for Jaipur and Jaipur rural along with few assembly segments of Dausa parliamentary constituency.

The BJP is pinning its hope on the Modi factor to bounce back in Rajasthan and secure maximum possible seats in Lok Sabha polls.

Mr Modi’s tough stance on Pulwama, backing of armed forces, implementation of One Rank One Pension scheme  and nationalism could help tilt the voters in its favour. Incidentally, the border state has a huge population of former servicemen and serving men in the armed and paramiltary forces.

Interestingly,  all BJP Lok Sabha hopefuls are seeking votes in the name of the Prime Minister and his muscular policy against terrorism.

Party sources pointed out that an aggressive campaigning by BJP’s star campaigner, Prime Minister Modi, helped the party get a respectable number of seats despite Ms Raje’s negative image among the party  cadre and huge anti incumbency in the state.

Rajasthan had elected all 25 of its Lok Sabha MPs from the BJP in 2014. Howver, the  party was only able to secure 75 seats in the 200 members in the recently held state Assembly polls, losing the crucial state to the Congress.