Karnataka will go to the polls in two phases, 14 constituencies each, on April 18 and 23. 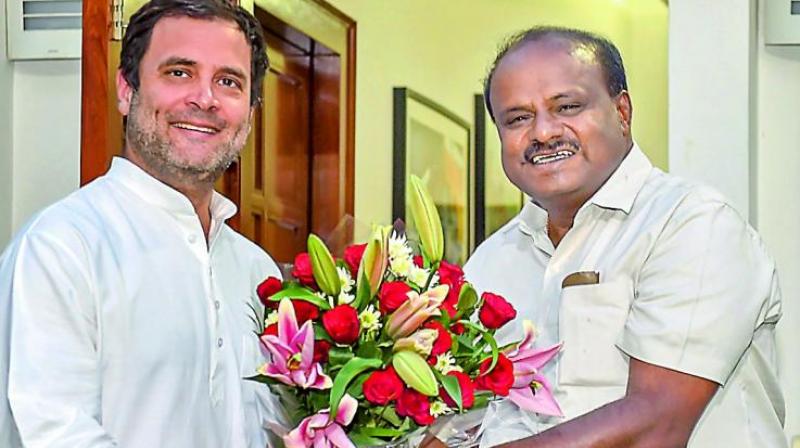 Congress and JD(S) ministers, MLAs and leaders will be part of the event. (Image: PTI)

Titled 'Parivartana Samavesha', this will be the first rally jointly organised by the Congress and JD(S) after the combine came to power.

Chief Minister H D Kumaraswamy, who visited BIEC ground near Nelamanagala to inspect the arrangements being made, said the event would be "historic." "This will be the first joint campaign by Congress and JD(S)...tomorrow's meeting is historic as it will send a clear message to people of the country from Karnataka for Lok Sabha polls," Kumaraswamy told reporters here. Congress and JD(S) ministers, MLAs and leaders will be part of the event. Sunday evening's rally will also be attended by lakhs of workers of both parties from Tumkur, Ramanagara, Bengaluru Rural and Bengaluru urban districts, Congress and JDS sources said. Following this, state leaders of both parties would organise similar joint meetings at several places across Karnataka, they said.

According to seat sharing arrangements, the Congress and JD(S) have decided to contest in 21 and 7 seats respectively. For the coalition to emerge as a formidable opposition to BJP and win more number of seats, it is crucial for the Congress to transfer its votes to the JD(S) and vice-versa. However, dissidence over seat sharing among workers of both parties, who have been arch rivals for decades, has caused worry to coalition leaders. According to the sources, organising the joint campaign is aimed at addressing this disgruntlement and send out a message that both the alliance partners are together. Both parties that had fought against each other ahead of May 2018 assembly polls joined hands to form an alliance as the election threw up a hung verdict. Karnataka will go to the polls in two phases, 14 constituencies each, on April 18 and 23.