Promoting the cause of yoga, the CM lauded Prime Minister Narendra Mod’s initiative which had led to June 21 being declared as World Yoga Day. 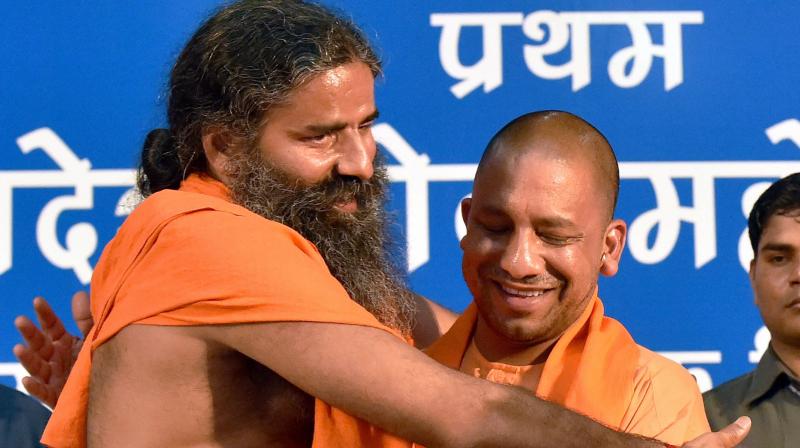 Lucknow: UP chief minister Yogi Adityanath, on Wednesday, said that the postures in surya namaskar were similar to those done while offering namaz. Speaking at the opening of a three-day “Yoga Mahotsav” here, the CM said “surya namaskar was a yogic exercise” and that it was wrong to attribute any religious motives to it.

“Some vested interests attribute a religious agenda to everything and misguide Muslims. There is no religion in surya namaskar and performing it helps in improving one’s health,” he said, adding that it was time for all to decide what was communal and what was not. He said the salutation was a beautiful example of religious harmony.

“The namaz offered by Muslims resembles different postures and asanas of surya namaskar, including pranayam. What a beautiful example of harmony (between two religions). But some bhogis who do not believe in yoga indulged in dividing society on lines of caste, creed, religion and region,” he said.

“All asanas (postures) in surya namaskar, pranayam activities are similar to the way namaz is offered by our Muslim brothers. But nobody ever tried to bring them together as a few people were interested only in bhoga, not yoga,” he said, adding that people belonging to all communities and religions should do yoga to lead a better and healthier life.

The chief minister’s statement assumes importance in view of the controversy over surya namaskar and the refusal of some Muslims to accept it in the school curriculum. In 2015, the All India Muslim Personal Law Board declared that it would launch a campaign against making surya namaskar compulsory in government schools.

Promoting the cause of yoga, the CM lauded Prime Minister Narendra Mod’s initiative which had led to June 21 being declared as World Yoga Day. “Yoga improves one’s mental and physical health and gives energy. It allows a person to remain healthy even in old age. There is nothing religious or communal about it. Yoga can be performed within the confines of one’s home or even sitting on a chair”, he said.

The chief minister also thanked the PM for giving him the leadership of Uttar Pradesh. “These days people don’t give alms to sadhus, and Modiji has given me Uttar Pradesh”, he said. Baba Ramdev and Swami Bharat Bhushanji Maharaj were present at the event.