We have shown how a majority government can take strong, big decisions: PM

The PM was in Surat to lay the foundation stone for the extension of the terminal building at Surat Airport. 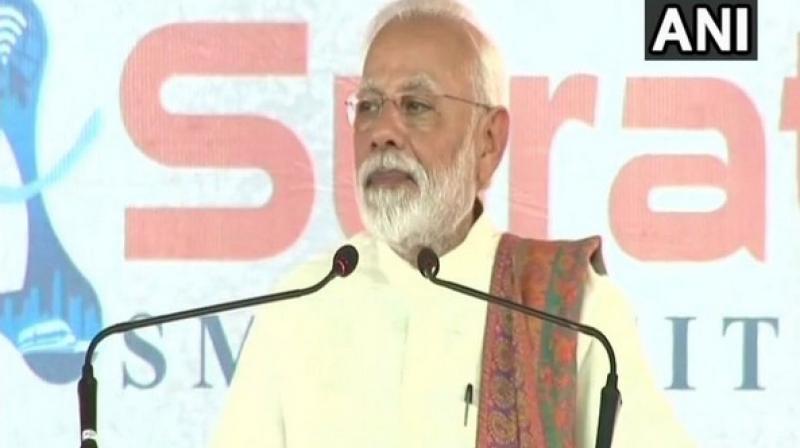 ‘The change that people are witnessing in India is because of the power of the vote and not the power of Modi,’ Prime Minister Narendra Modi said at the event. (Photo: ANI)

Surat: The BJP government has shown how strong and big decisions are taken, Prime Minister Narendra Modi said on Wednesday while asserting that the work done by his government in four years would have otherwise taken 25 years by others to complete.

Addressing a rally in Surat, he listed a host of initiatives and decisions taken by his government covering sectors like economy, aviation and energy.

The Prime Minister had to pause his speech in between after he saw that a cameraman had fainted. He stopped his speech and asked officers and SPG personnel to urgently arrange for an ambulance for the cameraman.

He was in Surat to lay the foundation stone for the extension of the terminal building at Surat Airport.

In his speech, Prime Minister Modi said: "The previous government (of UPA) made 25 lakh houses across India. To provide shelter to the poor people, the BJP-led central government has made 1.30 crore houses in the last four years. If they had to do the amount of work I am doing, then they would have taken 25 more years".

He added, "The change that people are witnessing in India is because of the power of the vote and not the power of Modi. For 30 years, coalition governments ran the country. All of them took their benefit from it. One prime reason behind the development of India is that people have given votes intelligently and gave freedom to the country from coalition."

The Prime Minister went on to add that the "young generation can see that, the government with a fruitful majority can take strong as well as big decisions".

"It can take the country forward powerfully. The government with a fruitful majority is answerable also. Today, anybody can ask me, 'What have you done in the last four-and-half years?' If it was a coalition government, I could have made excuses," Prime Minister Modi said.

"LED bulbs, which used to cost Rs 350 per piece earlier, today can be bought for Rs 40-50. Now don't ask that if the Rs 40 bulb used to be sold at Rs 350 earlier, then where the remaining amount used to go. Don't ask me that. Rajiv Gandhi gave an answer to this. He already said that from Rs 1 only 15 paise used to reach people. Everybody knows in whose hands the remaining 85 paise used to go," he added.

Prime Minister Modi also pointed out that a "recent international report stated that in the next 10-15 years, the top 10 fastest developing cities will be from India. And Surat will top the list of those 10 cities."

He said, "Surat airport is currently the third biggest airport in Gujarat. As many as 1,200 domestic and 600 international passengers can be looked after here after the completion of the new terminal. Current the airport gets four lakh footfalls in a year. This will go up to 26 lakhs in the future."

Prime Minister Modi said that the central government is "making all possible efforts to connect India through air connectivity. For this, 17 airports have been upgraded in the last three-four years. The government's aim is to develop 50 such airports which are either not in use currently or not being used frequently".