India   Politics  30 Jan 2017  I am sure Netaji will campaign, SP-Cong alliance would ensure UP win: Akhilesh
India, Politics

I am sure Netaji will campaign, SP-Cong alliance would ensure UP win: Akhilesh

Voicing displeasure over the alliance between SP and Congress, Mulayam Singh Yadav said he would not campaign for it in the assembly polls. 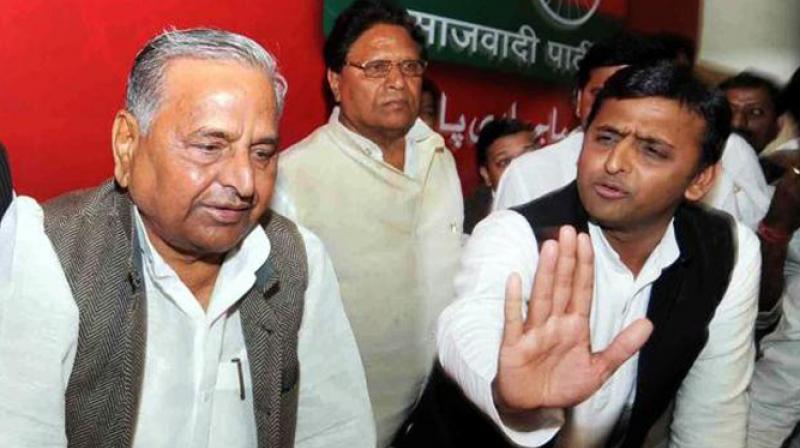 Lucknow: Uttar Pradesh Chief Minister Akhilesh Yadav, who forged an alliance between the Samajwadi Party (SP) and the Congress for the upcoming elections in the state, said on Monday that his father and SP patriarch Mulayam Singh Yadav would campaign for the party.

Speaking to NDTV, Akhilesh said that he was confident that SP would win the elections alone, but an alliance with the Congress would "firm up the verdict".

“I am sure Mulayam Singh Yadav will campaign for us,” Akhilesh said.

Voicing displeasure over the alliance between Samajwadi Party and Congress, SP patriarch Mulayam Singh Yadav on Sunday said he would not campaign for it in the state assembly polls.

"I am completely against the alliance. I will not campaign for it," Mulayam said on a day his son and Chief Minister Akhilesh Yadav and Congress vice president Rahul Gandhi held their first joint press conference in Lucknow and held a road show displaying great bonhomie.
Mulayam, who had rejected the possibility of an alliance for the assembly polls before being deposed as party president by Akhilesh, said, "Congress ruled the country for a long time and made it laggard. We always fought against Congress."

"Samajwadi Party is capable of contesting elections alone. In the past, it fought alone and formed government with a majority. No occasion arose for effecting an alliance," he said.

Addressing a rally on Monday, Akhilesh said Netaji’s respect will increase if the freshly forged alliance forms the next government in the state.

"If we win, it will be Mulayam Singh whose respect will increase the most," Akhilesh said while addressing a rally in Etah.

He also used the occasion to train guns at the Bahujan Samaj Party (B SP), saying if Mayawati-led party comes to power then it will construct more elephants in the state.

"If elephant's size increases then imagine what size elephant she will construct," said Akhilesh.