One of the most noticeable women candidate for the Congress is sitting MLA from Malerkotla, Razia Sultana. 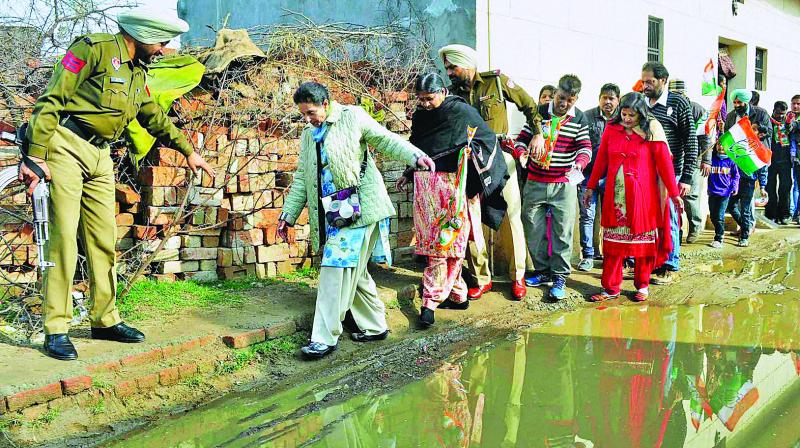 Patiala MLA Preneet Kaur walks on a waterlooged road during an election campaign for her husband Amrinder Singh in Patiala. (Photo: PTI)

Chandigarh: As campaigning for the crucial Punjab Assembly elections enters a crucial phase, one of its most noticeable feature has been the lack of women candidates, especially from politically high-profile backgrounds. Unlike some of the previous elections in the state, which had some high-profile female candidates in the fray like Union minister Harsimrat Kaur Badal, Preneet Kaur, Navjot Kaur Sidhu and Bibi Jagir Kaur, the trend has faded this time.

One of most important woman candidate in the fray for the upcoming elections is Kuldeep Kaur Tohra, daughter of one of the biggest Akali Dal leaders, Gurcharan Singh Tohra. She is contesting on an Aam Admi Party ticket from Sanaur Assembly segment near Patiala. Another high profile woman candidate happens to be Sarbjit Kaur, wife of former senior Akali Dal minister Kanwaljit Singh.

“Out of 112 seats that out party is contesting, we have given tickets to nine women candidates. Unlike other parties our focus is not on the political background of your family but the past track record of the candidate and their clean image,’’ Ms Tohra told this newspaper over telephone.

The AAP has another well-known woman candidate in the form of Anu Randhawa, who is the daughter of former Congress minister Jasjit Randhawa, and is contesting from Ghana seat.

One of the most noticeable women candidate for the Congress is sitting MLA from Malerkotla, Razia Sultana. She is the wife of former senior Punjab police officer, Mohammad Mustafa. Malerkotla is the only Assembly seat in Punjab where Muslim voters have a sizeable presence and they are often the deciding factor in elections. “Out of all the parties in the fray for Punjab Assembly elections, the Congress has fielded the most number of women candidates,’’ Ms Sultana said.

One of the reasons why former high profile women candidates are not in the fray this time is that Harsimrat Kaur Badal, wife of caDeputy Chief Minister Sukhbir Badal is already a sitting Lok Sabha MP and  a Union Minister.

Similarly Preneet Kaur, wife of Punjab Congress chief Capt Amarinder Singh, has given up her  Patiala urban seat in favour of her husband while Ms Sidhu has done the same for husband Navjot Singh Sidhu who is contesting from Amritsar East Assembly segment. On the other hand former SGPC chief  and senior Akali leader Bibi Jagir Kaur is not contesting following her conviction in a criminal case.

Out of 117 Assembly seats in Punjab, political parties have fielded 27 women candidates this time.

``As compared to 93 women candidates in fray during last assembly elections in 2012 to just 27 this time is a big drop. Perhaps parties could have done better but then this time Punjab is facing an unprecedented triangular contest and parties are in mood to take any risk as far as winnability of their candidates is concerned,’’said Dr Padma Sharma, a lecturer at Punjab University.