Government has used vague and unspecific language, indicating its unwillingness to discuss the full agenda items proposed by farmers: AIKSCC 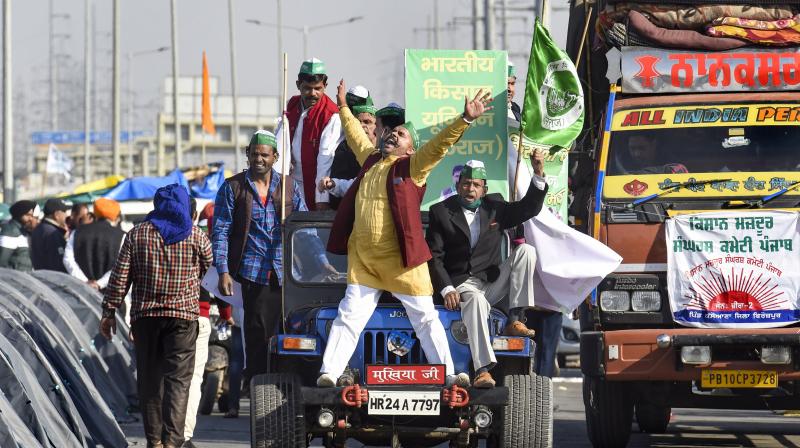 So far, five rounds of formal talks held between the Centre and the 40 protesting farmers’ unions have been inconclusive (Image:PTI)

New Delhi: Agreeing to discuss the farmers’ four-point agenda, the agriculture ministry on Monday invited 40 protesting farmers’ unions for the next round of talks at Vigyan Bhavan here on Wednesday to find a “logical solution” to the current impasse over the three new farm laws. This will be the sixth time the Centre will be trying to convince the farmers to call off their ongoing month-long agitation at Delhi’s borders.

Reacting to the government’s invitation, the All India Kisan Sangharsh Coordination Committee (AIKSCC) said the Centre had shown an unwillingness to resolve the issue. In a statement, the AIKSCC said: “The government has used vague and unspecific language, indicating its unwillingness to discuss the full agenda items proposed by farmers.” The organisation said the government was trying to find ways to blame the farmers in order to cover up its consistent adamant stand of continuing with the three farm laws and the proposed Electricity Bill 2020.

Union agriculture minister Narendra Singh Tomar said, however, that he was hopeful of finding an early solution. Speaking at a virtual event organised by the Confederation of NGOs of Rural India (CNRI), he said a “wall of lies” has been spread in a “planned manner” among the farmers against the new laws, but it will not last long and the protesters will soon realise the truth.

The minister said: “Soon, some way out will emerge and we will reach towards a solution… Everyone knows that the wall of lies is never strong. Truth is truth. There is going to be a time when people will start accepting the truth.”

The Centre invited the farmers for talks after Union home minister Amit Shah held a high level-meeting with Cabinet colleagues Piyush Goyal and Mr Tomar. After the meeting, agriculture secretary Sanjay Aggarwal sent an invitation to the farmers’ unions for talks at 2 pm on December 30 at New Delhi’s Vigyan Bhavan.

Taking note of the letter sent by farmers’ unions last week on resuming talks, Mr Aggarwal said: “The government is also committed to finding a logical solution on all relevant issues with a clear intention and an open mind.” With regard to the agenda proposed by the unions for the meeting, he said a detailed discussion will take place on the three laws, the MSP procurement system as well as the Electricity Amendment Bill and an ordinance to tackle air pollution in and around Delhi/NCR.

The government, however, did not make any specific reference to one key condition proposed by the unions: seeking talks on the modalities for the repeal of the three farm laws. The date given by the government for the next round of talks coincides with the day when the farmers’ unions have decided to hold a tractor march from the Singhu and Tikri borders to the Kundli-Manesar-Palwal (KMP) highway.

In its December 26 letter, the Samyukt Kisan Morcha, a joint front of almost 40 farmers’ outfits, had accepted the Centre’s offer for dialogue and proposed December 29 as the next meeting date. The morcha had proposed a four-point agenda for the talks that included  modalities to be adopted for the repeal of the three farm laws; mechanisms to make the remunerative MSP recommended by the National Farmers’ Commission into a legally guaranteed entitlement for all farmers and all agricultural commodities; amendments to be made and notified in the Commission for Air Quality Management in National Capital Region and Adjoining Areas Ordinance 2020 to exclude farmers from its penal provisions; and changes in the draft Electricity Amendment Bill 2020 to protect the interests of farmers.

Ahead of the sixth round of talks, farmers’ leader Rakesh Tikait said the talks were still on the table. However, he warned: “Today is the 33rd day of the protest. If the government won’t listen, then we will use Formula 66, which means we will continue the agitation for double the days (66 days).”

In the last formal meeting on December 5, the farmers’ leaders had demanded a clear “yes or no” answer from the government on their main demand of the repeal of the three laws. The sixth round of talks due on December 9 was called off a day after Mr Shah’s informal meeting with some union leaders failed to reach any breakthrough.

So far, five rounds of formal talks held between the Centre and the 40 protesting farmers’ unions have been inconclusive. The farmers have been adamant about the scrapping of the laws while the government has made it clear it could only accept changes in the laws, not their repeal.

Thousands of farmers, especially from Punjab, Haryana and parts of Uttar Pradesh, camping at Delhi’s borders since November 26, are seeking a repeal of the three laws. While the protesting farmers have threatened to intensify their agitation if their demands are not fulfilled, the representatives of 25 farmers’ unions gave a memorandum to Mr Tomar extending support to the new farm laws. The minister tweeted: “Today, a delegation of various farmers organisations from all over the country gave a memorandum in support of the new agrarian reform bills and said all these bills are in the interest of farmers, they should not be withdrawn. They also thanked Prime Minister Narendra Modi.”