'Having bad leader not Maharashtra's fault, staying with one is': Amruta Fadnavis slams Sena

In her tweet, Amruta Fadnavis also tagged a news report in which she said that she won't back down in her criticism of Sena-led government. 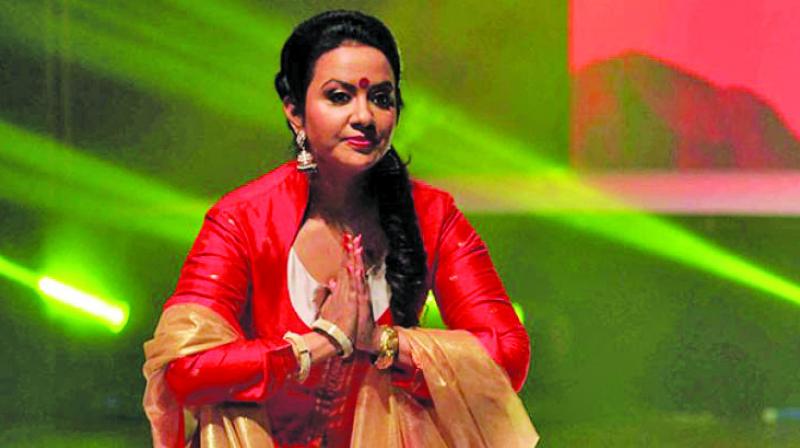 Former Maharashtra chief minister Devendra Fadnavis' wife Amruta Fadnavis, who was recently engaged in a war of words with the Shiv Sena, has in a cryptic comment said having a bad leader was not the state's fault, "but staying with one is". (Photo: File)

Mumbai: Former Maharashtra chief minister Devendra Fadnavis' wife Amruta Fadnavis, who was recently engaged in a war of words with the Shiv Sena, has in a cryptic comment said having a bad leader was not the state's fault, "but staying with one is".

"Having a bad leader was not Maharashtra's fault-But Staying with one is!" the former CM's banker wife said in a post on her Twitter handle on Saturday.

She ended her tweet with words "Jaago Maharashtra" (wake up Maharashtra). Her comments came days after the Shiv Sena-ruled Thane Municipal Corporation decided to shift its salary accounts from Axis Bank, where Amruta Fadnavis holds a senior position, to a nationalised bank.

In her tweet, Amruta Fadnavis also tagged a news report in which she said that she won't back down in her criticism of the Sena-led government.

"The accounts were bagged by Axis bank much before I married Devendra.. during the tenure of the Congress-NCP regime. Private banks are also Indian banks and provide superior technological services. The government should think rationally. By doing this(shifting the accounts), they (the government) are trying to target Devendra and me," she told a national daily.

"Devendra never targeted people. This is against freedom of speech and both I and Devendra will not be silenced. If I feel there is something wrong or some decision impacts the people wrongly, then I will raise the issue," she further told the newspaper.

There have also been reports that Axis bank may lose Maharashtra police departments salary accounts, worth Rs 11,000 crore annually, with the Uddhav Thackeray-led regime mulling to transfer them to a public sector bank.

Last week, Amruta Fadnavis posted a tweet attacking Thackeray while responding to her husband's tweet to condemn Rahul Gandhi over his "My name is not Rahul Savarkar" remark.

Devendra Fadnavis had said Rahul Gandhi was nowhere close to even a single deed of Veer Savarkar.

Taking a cue from her husband's comment, Amruta Fadnavis taunted the Shiv Sena president, saying one cannot be a 'Thackeray' just by putting Thackeray after his name.

Hitting back, Shiv Sena deputy leader Priyanka Chaturvedi said Thackeray was living up to his name and Amruta Fadnavis was missing the point. Chaturvedi and Amruta Fadnavis earlier also had a war of words on social media over reports that the Uddhav Thackeray government was planning to cut down around 1,000 trees in Aurangabad to build a memorial for Bal Thackeray.

The Shiv Sena, NCP and Congress formed the government in Maharashtra last month after the Thackeray-led party parted ways with pre-poll ally BJP over sharing the chief ministerial post.