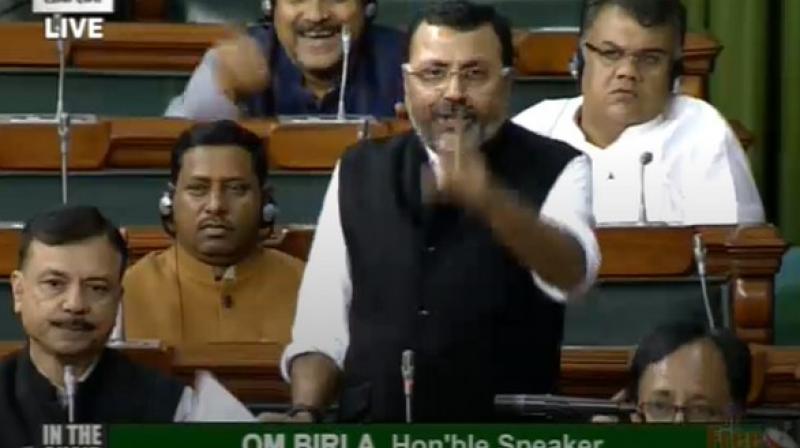 'Congress has made a government with Shiv Sena in Maharashtra. Shiv Sena called Nathuram Godse a patriot in 'Saamna',' Dubey said. (Photo: ANI)

"Calling a woman a terrorist is worse than the murder of Mahatma Gandhi. Hence I request you to move privilege against Rahul Gandhi," said Dubey in Lok Sabha on Friday.

"Congress has made a government with Shiv Sena in Maharashtra. Shiv Sena called Nathuram Godse a patriot in 'Saamna'. Congress can go up to any extent for power and greed," he said.

Pragya Thakur on Friday apologised in the Lok Sabha over her controversial remark praising Mahatma Gandhi's assassin Nathuram Godse but also added that her statements made in the Parliament are being distorted.

In Lok Sabha, Thakur said that if her remarks have hurt anyone, she regrets it and tenders an apology. "I apologise if comments made by me has hurt the sentiments of anyone," she said, adding that Mahatma Gandhi's contributions can't be ignored. She also said that her statement has been twisted.

"Terrorist Pragya calls terrorist Godse, a patriot. A sad day, in the history of India's Parliament," Rahul Gandhi had tweeted on November 27.

The MP from Bhopal had triggered uproar during a discussion in the lower house on the Special Protection Group (Amendment ) Bill by DMK member A Raja, interjected with a remark purportedly in praise of Mahatma Gandhi's assassin Nathuram Godse.

However, later on, she claimed that she was referring to Udham Singh. Speaker Om Birla expunged Thakur's remark from the record but opposition members protested outside the House.

"Rahul Gandhi has no right to call any respected Member of Parliament a terrorist without any basis. He should immediately apologies to the country and the House," tweeted Union Minister Giriraj Singh.