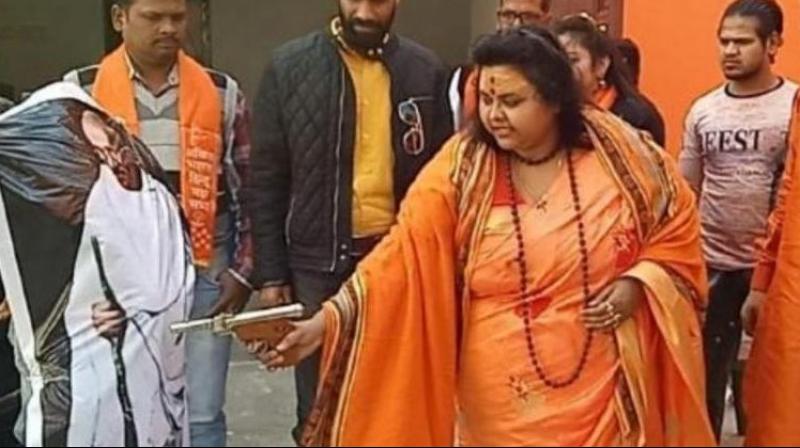 Hindu Mahasabha activists had observed the death anniversary of Godse at the outfit's office here on November 15 According to police. (Photo: Twitter)

Hindu Mahasabha activists had observed the death anniversary of Godse at the outfit's office here on November 15 According to police, a day before the programme, the activists of the right-wing outfit had allegedly distributed pamphlets describing Mahatma Gandhi in an "objectionable" manner in the Daulatganj area.

Based on a complaint filed later, the Kotwali Police Station had filed an FIR against Mahasabha members Naresh Batham and others under section 153-A (promoting enmity between different groups on grounds of religion) of the Indian Penal Code (IPC).

The complainant, a local resident, alleged the language used in the handbills hurt the sentiments of Gandhians. "After investigating the case, four persons, identified as Narendra Batham, Pawan Mahaur, Kishore and Anand Mahaur, have been arrested in the past two days," said Kotwali Police Station in-charge Vivek Ashthana on Friday.

Mahasabha members had performed 'aarti' of Godse and Narayan Apte, the co-conspirator who was also hanged for Gandhi's assassination, at their office here on November 15.

Godse and Apte were hanged at the Ambala jail on November 15, 1949. On November 15, 2017, the Mahasabha had installed a bust of Godse at its office here after performing the ritual of 'pran pratishtha' (consecration). However, it was removed by the authorities following a furore.