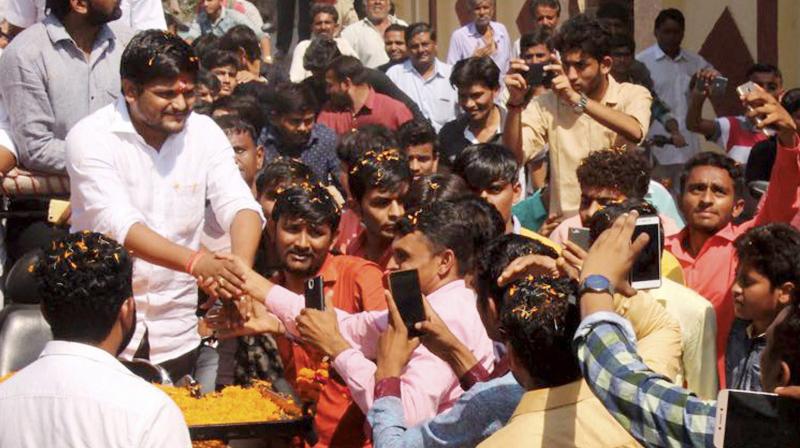 New Delhi: Trouble seems to be brewing for the Congress in its effort to put up a formidable challenge to the ruling BJP in Gujarat.

Hardik Patel, the Patidar community leader, on Saturday issued an ultimatum to the Congress to clearly state its stand by November 3 on how it plans to offer reservation to his community in government jobs and colleges.

Taking to Twitter, the convenor of the Patidar Anamat Andolan Samiti (PAAS) warned the Congress that if it fails to meet his deadline it will face protests similar to the ones at BJP chief Amit Shah’s Surat visit last September.

Hardik Patel’s tough talk precedes Congress vice-president Rahul Gandhi’s visit to Surat on Nov. 3 and comes with a threat to disrupt the party’s campaign rallies in the poll-bound state unless it clarifies its stand on quota for Patels.

Gujarat Congress spokesperson Manish Doshi said that the promised 20 per cent EBC quota “will not be a lollipop offer like the one made by the BJP”. There was speculation earlier that Hardik Patel could meet Mr Gandhi in Gujarat on November 1 to firm up plans for a joint fight against the BJP.

To make things difficult for the Congress, the JD(U), an NDA ally, announced on Saturday that it will contest elections in Gujarat on its own. In 2012, the JD(U) had contested five seats and won one.

With the AAP planning to contest 11 Gujarat seats and the JD(U) five, the space for Congress and like-minded outfits may get narrower. Both AAP and JD(U) are expected to dent the Congress vote bank.

With things changing rapidly for the Opposition in Gujarat, Prime Minister Narendra Modi signalled that all is well for the BJP.

Asked about Gujarat during an interaction with the media on Saturday, Mr Modi smiled and said, “Paramsukh (ultimate happiness).”

Fighting its toughest battle in Gujarat in the last two decades, the BJP is all set to make senior Congress leader Ahmed Patel’s alleged ISIS link a major poll plank. The saffron party has demanded Ahmed Patel’s resignation from Rajya Sabha over the issue that a suspected ISIS operative arrested recently used to work at a hospital and the Congress leader was one of its trustee.

The BJP’s strategy to corner Ahmed Patel became evident with minority affairs minister Mukhtar Abbas Naqvi describing the Congress leader’s alleged ISIS link as a “national security” issue. The BJP plans to tag this with its assertion that the Congress is a pro-Muslim party.

Hitting back at the BJP, senior Congress leader P. Chidambaram dubbed as “outrageous” the BJP’s demand for Ahmed Patel’s resignation from the Rajya Sabha.

Defending Ahmed Patel, Congress chief spokesperson Randeep Singh Surjewala said that the BJP resorted to such “sinister conspiracy” due to its “trepidation” of defeat in Gujarat.

The Congress also accused the BJP of trying to polarise voters on communal lines.