In Chengannur, the Congress chief visited the relief camp at the Christian College and that at an engineering college. 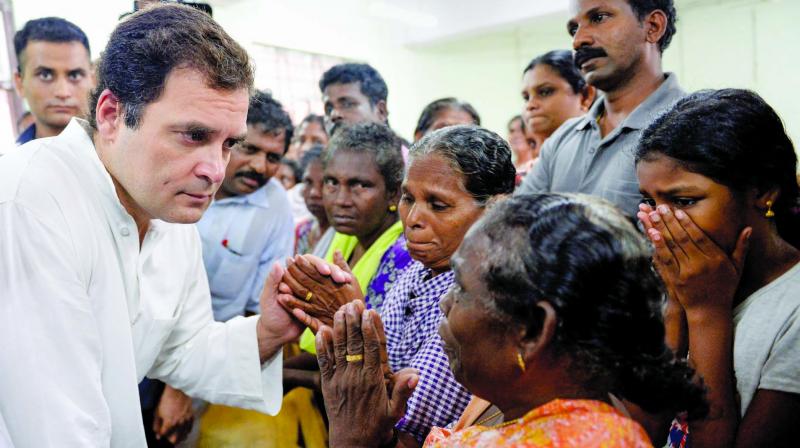 Congress President Rahul Gandhi interacts with the flood-affected people at a relief camp in Chengannur, Kerala on Tuesday. (Photo: PTI)

Thiruvananthapuram: Congress president Rahul Gandhi on Tuesday embarked on a tour of flood-affected areas in Kerala and spoke to people at relief camps, days after the deluge left a trail of destruction and death in the state.

Mr Gandhi, who arrived from the UK, visited relief camps in Cheng-annur and Alapuzha. He would also visit some camps in Ernakulam district later in the day. During his two-day visit to Kerala, Mr Gandhi will also tour flood-hit areas of Wayanad and Kozhikode districts on Wednesday.

“President of @INCIndia @RahulGandhi left Thiruvananthapuram this morning for flood-affected areas in central Kerala. His two-day visit will cover districts with the heaviest inundation over the last two weeks.” Congress leader and Thiruvananthapuram MP Shashi Tharoor said on Twitter.

In Chengannur, the Congress chief visited the relief camp at the Christian College and that at an engineering college. He spoke to people at both the centres.

Leader of Opposition in the Kerala Assembly Ramesh Chennithala and Congress’s state unit president M.M. Hassan were among those present at the camps.

“Congress President @RahulGandhi meets the flood affected at the Relief Camp at the Engineering College in Chengannur, Kerala #RebuildingKe-rala,” the party tweeted, attaching photos of Mr Gandhi meeting people at the camps.