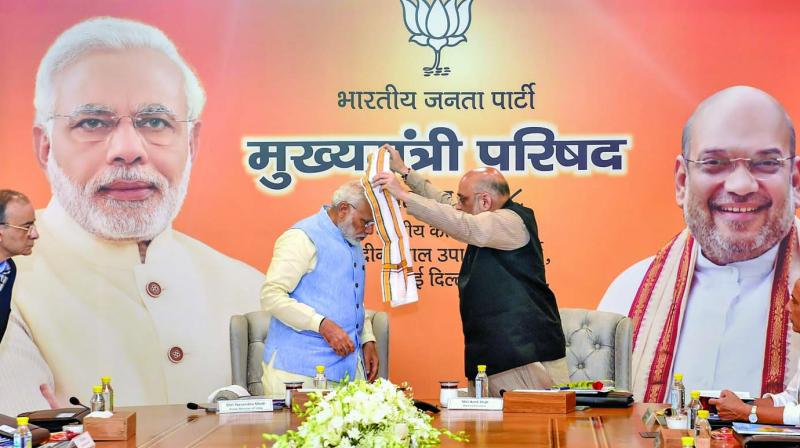 While the party exuded confidence that it will win the 2019 general elections with a bigger majority under Mr Modi’s leadership, the party’s poll strategy will focus mainly on government’s development initiatives along with its commitment towards social justice and the national security.

At the day long meeting, other than the Central and states’ schemes and their impact, BJP leaders also discussed National Register of Citizens, recently passed legislations regarding the SC/ST Act and constitutional status to the OBC Commission and the Citizenship amendment bill, issues which have more political impact.

Chhattisgarh chief minister Raman Singh, who briefed the media later said that the party leaders discussed various development works and people centric schemes of the Centre and the states and expressed confidence that the party will emerge victorious in 2019 with a bigger majority than 2014, under Mr Modi’s leadership.

The party also exuded confidence that it will retain power in three party-ruled states — Raj-asthan, MP and Chhatti-sgarh — where Assembly polls are scheduled by the end of this year.

Earlier in the day, Mr Shah inaugurated the day-long meeting in which it was decided to meet targets of the ‘Swachchh Bharat’ scheme in a time-bound manner. Union ministers Rajnath Singh, Arun Jaitley and Nitin Gadkari also attended the meeting. Mr Modi joined the meeting later in the day.

The Prime Minister in his address spoke about laws passed by Parliament for welfare of Dalits, tribals and Other Backward Communities, besides measures such as hiking minimum support price for crops to benefit farmers. Mr Modi also asked CMs to focus on speedy execution of Swachh Bharat and Gram Swaraj projects and take it to the masses during elections.

The meeting also passed a condolence message commemorating former PM Atal Bihari Vajpayee. as a leader who brought to fruition the concept of good