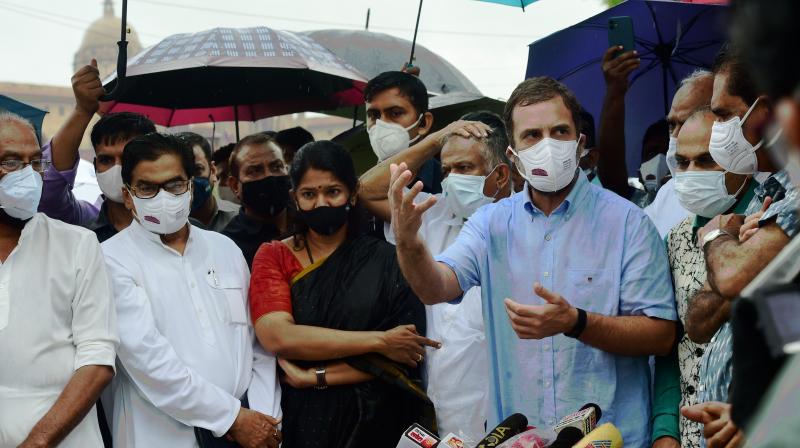 New Delhi: Leading the Opposition’s charge against the Centre, Congress leader Rahul Gandhi on Wednesday questioned the Central government over the Pegasus issue and asked the leadership to clarify if the spyware was used to snoop on Indians. Attacking Prime Minister Narendra Modi over the Pegasus issue, Mr Gandhi said using Pegasus spyware against Indian citizens was, in his view, an “anti-national” activity. He said: “The issue of Pegasus is an issue of nationalism and treason for us because this weapon was used against democracy. For me, it’s not an issue of privacy, but an anti-national activity.” He added: “This weapon was used against India. This is a weapon that should have been used against terrorists, but Modiji and Amit Shah should tell us why it was used against democracy. Narendra Modi and Amit Shah have hit the soul of India’s democracy by using Pegasus against India and its institutions.”

Mr Gandhi claimed the government doesn’t want the Pegasus issue to be discussed in the House. He said: “We have been told by the government that no discussion will take place on Pegasus in the House. I want to ask the youth of the country: Narendra Modi has put a weapon in your phones. The weapon was used against me, other leaders and activists, but why is this issue not being discussed in Parliament?”

Responding to the allegation that the Opposition was obstructing Parliament from functioning, Mr Gandhi said: “The government said we are obstructing parliamentary proceedings... but I want to say we only want to fulfil our duty.” Mr Gandhi was addressing reporters after a meeting of 14 Opposition parties at a meeting to chalk out a strategy to take on the government on the Pegasus phone-hacking scandal, that has triggered protests in and forced repeated adjournments of Parliament’s Monsoon Session.

Besides the Congress and the Shiv Sena, CPI(M), CPI, Rashtriya Janata Dal, AAP, DMK, NCP, National Conference and Samajwadi Party joined the meeting on Wednesday. A number of smaller parties like the Muslim League, Revolutionary Socialist Party, Kerala Congress and Viduthalai Chiruthaigal Katchi also took part. The Trinamul Congress, whose state government in West Bengal has ordered a judicial inquiry on the Pegasus allegations, was not present, but its senior MP Derek O’Brien said later that the Opposition was “100 per cent united” and that it had informed the Congress earlier that his party would be absent at Wednesday’s meet.