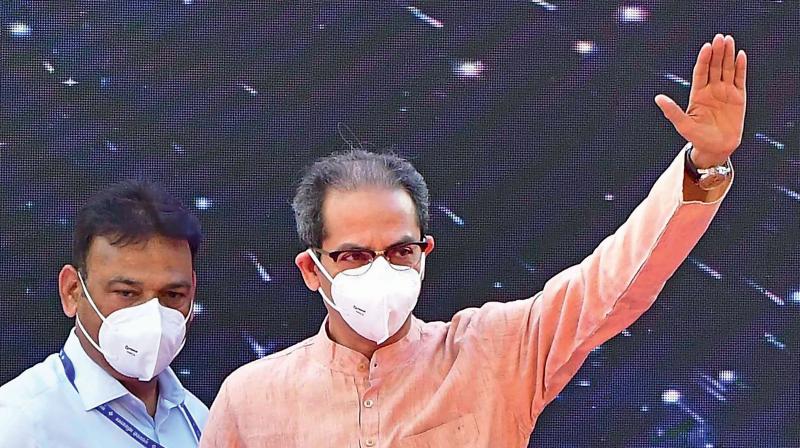 Mumbai: Political developments in Maharashtra gathered momentum late on Tuesday night as senior BJP leader and former CM Devendra Fadnavis met governor Bhagat Singh Koshyari, and is learnt to have sought a special session of the state Assembly to prove the majority of the Maha Vikas Aghadi (MVA) government.

Mr Fadnavis, with state BJP chief Chandrakant Patil and other party leaders, called on Mr Koshyari at around 10 pm shortly after he returned to the city from New Delhi, where he had gone to consult the leadership. Mr Fadnavis said: “We have written a letter to the governor in which we mentioned the current political situation. Thirty-nine MLAs of the Shiv Sena are out of the state and they do not want to continue in the government with the NCP and Congress. The MVA government has lost its majority. We have requested the governor to ask the chief minister to prove his majority in the Assembly.”

This is the first time the BJP has directly got into action after Shiv Sena leader Eknath Shinde rebelled against the MVA government along with 39 party MLAs.

Earlier, in a last-ditch effort to persuade the rebel MLAs, Shiv Sena supremo and Maharashtra CM Uddhav Thackeray on Tuesday made a passionate appeal asking them to return and hold talks. “Come back to Mumbai, let’s talk, we’ll find a way (out),” he said. Saying it was still not too late, Mr Thackeray claimed other parties will not be able to offer the respect and honour the Shiv Sena has given them. “Don’t fall prey to anyone’s missteps. The honour given to you by the Shiv Sena can’t be found anywhere. If you come forward and speak, we will sort out the issues. As Shiv Sena party chief and family head, I am still worried about you. Come here for a dialogue,” he said.

“You (rebel MLAs) have been stuck in Guwahati for the last few days. Every day new information is coming forth about you. Many of you are in touch with us and you are still in the Shiv Sena. Some family members also contacted me,” Mr Thackeray added.

Meanwhile, before Mr Fadnavis met Mr Koshyari, sources said eight Independent MLAs had sent an email to the governor from Guwahati urging him to order a floor test. Party sources in New Delhi claimed that there was a good chance that Mr Fadnavis might be able to attend the BJP national executive meeting in Hyderabad from July 2 as the new CM of Maharashtra.

Earlier, the Shiv Sena refuted reports that Mr Thackeray had called Mr Fadnavis in a bid to save his government. In a statement, the party said: “The news that Maharashtra CM Uddhav Thackeray called Devendra Fadnavis to save the government is utterly misleading. What Uddhav Thackeray has to say, he speaks publicly.”

The Maharashtra CM has also directed the state urban development department to submit all files related to decisions taken by rebel leader Eknath Shinde from June 1.

Meanwhile, Mr Shinde said in Guwahati he will return to Mumbai soon and that his faction was taking “Balasaheb’s legacy forward”. He added that false information was being spread in public on the MLAs being in touch with the Sena leadership. This came after Shiv Sena MP Sanjay Raut claimed the party was hopeful of the return of a few MLAs, whom the party did not consider rebels as they were still in touch with them.

“I am not leaving the Shiv Sena. I am the real Shiv Sena,” Mr Shinde said, rubbishing the claims of the Thackeray group that some 15-20 MLAs were in touch with them and wanted to return to Mumbai.

“I have 50 people with me in Guwahati, they have come of their own accord and for Hindutva. We all will go to Mumbai soon,” Mr Shinde said. He also said he would speak to Maharashtra governor Bhagat Singh Koshyari.

Mr Shinde’s stance was boosted by the Supreme Court ruling that the rebel MLAs cannot be disqualified for anti-party actions. Instead, the Shinde group has been given time till July 12 to explain its stand.

Reacting to Mr Thackeray’s appeal, Mr Shinde responded: “Your son and spokesperson (Raut) call us pigs, buffaloes, dogs, nullah dirt, uncivilised, dead bodies, etc. On the other hand, the same MLAs are being asked for a truce to save the anti-Hindu MVA government. What is the meaning of this?”