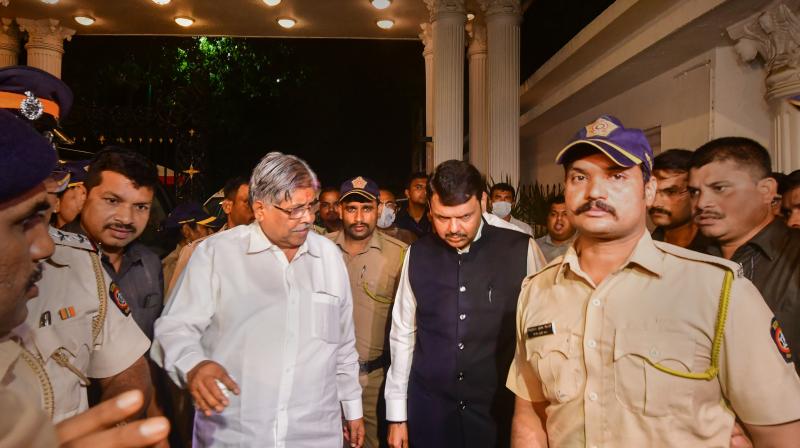 New Delhi: Amid the ongoing political crisis in Maharashtra and after reports that some of the rebel Shiv Sena MLAs in Guwahati were showing signs of discontentment, former Maharashtra chief minister and senior BJP leader Devendra Fadnavis on Tuesday met the BJP top brass, including party president J.P. Nadda and Union home minister Amit Shah, and also consulted legal luminaries, including Mahesh Jethmalani, Mukul Rohtagi and Tushar Mehta over the ongoing situation in his home state.

Fadnavis is also expected to meet rebel Sena leader Eknath Shinde in Mumbai after his meetings in the national capital. Though the BJP has denied it is playing any role in the Maharashtra crisis, it is facing flak by the MVA partners for trying to oust the incumbent government through “Operation Lotus”.

The ruling alliance in Maharashtra, Maha Vikas Aghadi — Shiv Sena, Congress and NCP — has been jolted after around 39 Sena MLAs and around 10 Independent MLAs rebelled against the MVA, demanding that the Sena break ties with the Congress and NCP and join hands with the BJP, with whom it had fought the last Assembly polls and the BJP-Sena alliance had secured an absolute majority in the state in the last polls.

Sources said that among the issues Fadnavis discussed with the BJP top brass and the lawyers was when and how a no-confidence motion against the Uddhav Thackeray-led government should be moved, how should the rebel MLAs be provided security on their arrival in Mumbai and also their safety inside the state Assembly and ongoing cases in the courts over the Maharashtra crisis.

Sources said the rebel MLAs could approach governor conveying the decision to withdraw their support from the Thackeray government, who then will be bound to ask the MVA for a floor test in the Assembly.