The streets were thronged with BJP supporters and party flags were waved as Shah's convoy passed through the streets. 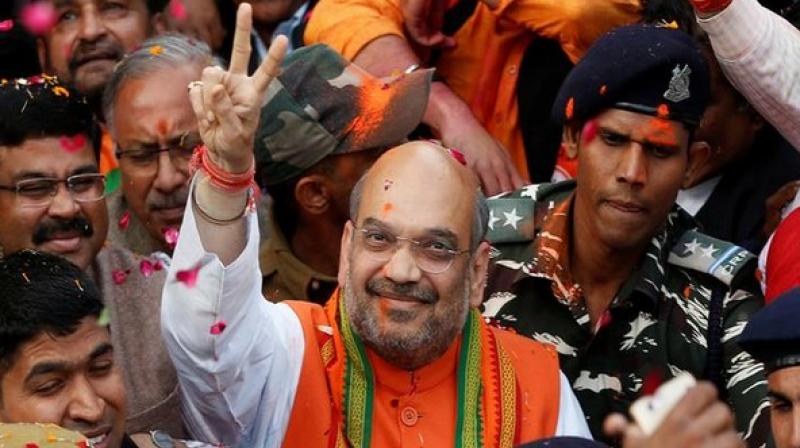 Jammu: Bharatiya Janata Party (BJP) Chief Amit Shah was accorded a grand welcome in Jammu and Kashmir on Saturday, where he landed on a two-day visit as part of his national 'Vistaar Yatra'.

The streets were thronged with BJP supporters and party flags were waved as Shah's convoy passed through the streets after he landed at the airport on Saturday.

Shah is on a 95-day all-India tour from Saturday during which he will strategise on ways to win the 2019 Lok Sabha election, with focus on clinching 120 seats where the party had lost in 2014.

Shah will spend one to three days in each states. The tour will focus on taking stock of the party's organisational strength and further expansion of electoral appeal across the country.

Shah is particularly focusing on states like West Bengal, Odisha, Telangana and Kerala.

The BJP had managed to win just 4 Lok Sabha seats out of the 102 in these states in the 2014 election.

Apart from his 95-day tour, Shah has also chosen five states where he will spend three days each. His recent visit to West Bengal was part of the programme.

Besides West Bengal, he will visit Odisha, Telangana, Lakshadweep and the poll-bound Gujarat.

Shah has also hinted at a reshuffle in the organisation as several office-bearers are now serving as ministers in the Uttar Pradesh government.