The manifesto also promises a law against lynching and immediate banning of private armies and vigilante groups. 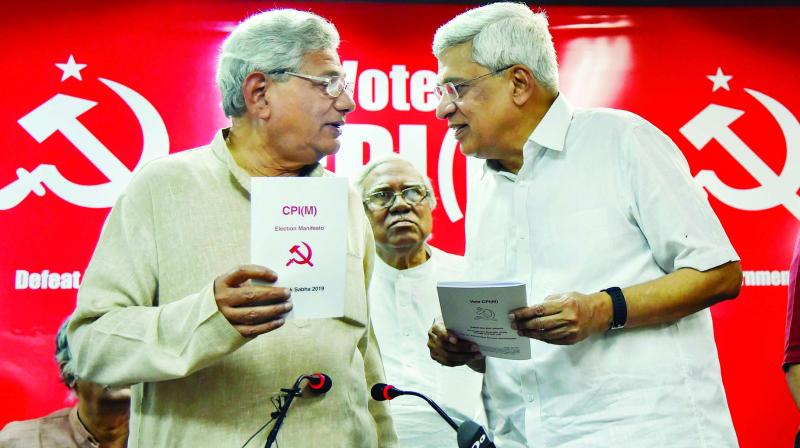 New Delhi: Scrapping the sedition law, an urban job guarantee scheme, ensuring the right to work and the removal of necessity for Aadhaar for social welfare schemes and the removal of RSS personnel appointed in key positions were some of the key promises in the CPI(M) manifesto which was released here on Thursday.

Seeking mandate for an “alternative” secular government that defends Constitutional values, the party’s manifesto also sought a reversal in the economic policies and sought reservation for Dalits in private sector jobs and educational institutions, taxing the rich, bringing back wealth and inheritance taxes and barring further dilution of government equity in banks and PSUs.

The manifesto also promises a law against lynching and immediate banning of private armies and vigilante groups, stopping bulk surveillance by central agencies replacing the controversial Armed Forces Special Protection Act (AFSPA) with a law devoid of “draconian” provisions, abolishing the death penalty and criminal provisions of defamation as well as the National Security Act are also part of the manifesto.

It sought to end private health insurance while ensuring the right to health, enforcing farmers’ right to sell their produce at a minimum support price that is at least 50% higher than the cost of production and 35 kg of good grains per family are among other highlights of the manifesto.

Accusing the Modi government of mounting a “brazen” assault on all Constitutional authorities and promoting “unprecedented sharpening of communal polarisation, CPI(M) general secretary Sitaram Yechury said, “The continuation of the BJP government will further undermine the fundamental pillars of our Constitution.”

“India has no dearth of resources. If the current loot of our resources through crony capitalism and corruption and scams like Rafale deal are plugged, enough resources are there for providing every citizen with education, quality health care, jobs and a decent livelihood,” he said.