Leader of opposition Ghulam Nabi Azad said the issue was important and required a discussion as members have already given notices. 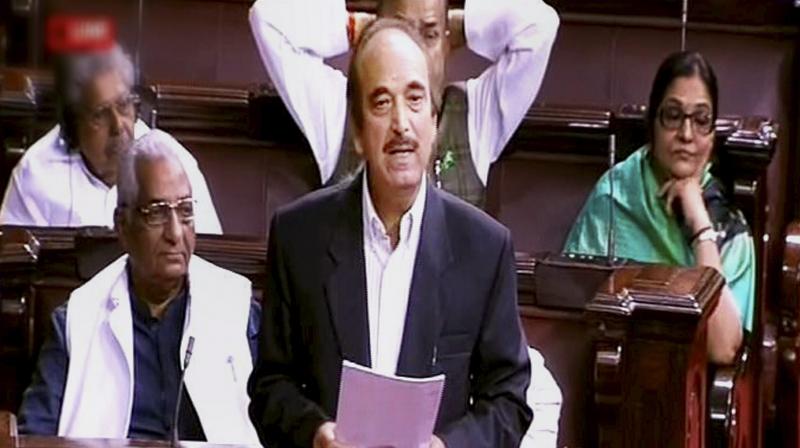 They were protesting over vacancies in commissions for scheduled castes, scheduled tribes, other backward classes and minorities.

The pandemonium continued even after the Narendra Modi government tried to address the concerns by saying the process was underway for filling up these vacancies.

However, MPs from the Congress, the Samajwadi Party, the JD(U) and the BSP kept demanding a commitment that it will be done within a week.

The House was repeatedly adjourned and finally for the day at 3.10 pm as the opposition parties insisted on an immediate discussion on the issue.

The Chair clarified that notices for a discussion under an adjournment motion have been disallowed.

Speaking amid the continuous din, social justice and empowerment minister Thawar Chand Gehlot said the delay in appointments to the statutory  commissions was due to the model code of conduct enforced during the recent Assembly polls in five states.

“The process of filling up the vacancies has started and the chairmen for the SC commission and the Safai Karamchari Ayog have been appointed,” the minister said. He added that it was not for the first time that there have been delays in filling up such vacancies.

He said that in 2007 and 2010, when the Congress-led government was in power, there was a delay of three and five months, respectively, in filling up such vacancies.

Leader of opposition Ghulam Nabi Azad said the issue was important and required a discussion as members have already given notices.

He sought to know whether the government would commit itself to appointing the chairmen and members in all the commissions within a week, and whether an immediate discussion on the issue was allowed or not. “Never has it happened in the country that all three commissions are headless and they are without members too. The SCs, STs, OBCs and minorities account for 80 to 85 per cent of total population,” he said.