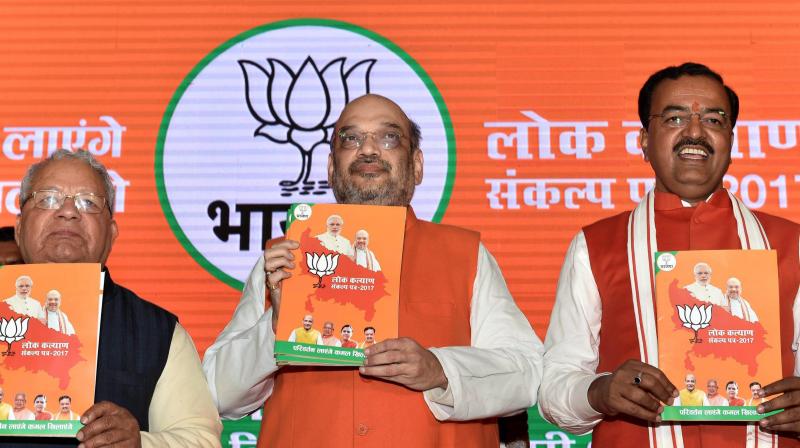 Lucknow: While packing in a raft of sops in its UP election manifesto, the Bhartiya Janata Party (BJP) looked to return to a Hindutva agenda as it promised to push for Ram temple in Ayodhya, and take up other contentious issues of triple talaq and cow slaughter. The party also said it would stop forced Hindu migration from UP’s riot-hit pockets if voted to power.

The announcements, which mark a departure from the BJP’s current narrative of development, come after the Congress and the ruling Samajwadi Party (SP) — both backed by a sizeable section of Muslim voters — recently joined hands ahead of UP’s seven-phase Assembly elections starting February 11.

Looking to form government in UP after 15 years, the BJP promised laptops but without caste discrimination and with a monthly 1 GB free Internet, free Wi-Fi on campuses, expansion of Metro services, increased air connectivity and Rs 150 crore for dairy units.

The party also promised 24-hour power supply, 70,000 jobs for the youth, free education to both girls and boys with riders, better “dial 100” services and schemes for farmers and landless labourers. All these issues were part of the SP manifesto.

Despite that the BJP’s manifesto drew sharp criticism from political opponents, with the BSP terming it another attempt to hoodwink voters, while the Congress and the SP called it a “bundle of lies”.

“After failing to fulfil the ‘achche din’ promise made during the 2014 Lok Sabha elections, the BJP has no moral right to bring out this manifesto,” BSP chief Mayawati said.

He promised loan waiver for small and marginal farmers and clearance of sugarcane dues within 120 days.

He also said that a welfare card will be issued to the poor who will be entitled to `6 lakh as home loan.

On the temple promise, Mr Shah said that if the BJP came to power in UP, it would use “constitutional means” to resolve the issue and pave the way for its construction. He did not explain how a state government would facilitate the construction of Ram temple as the matter is pending in the Supreme Court.

Mr Shah said that the issue of triple talaq was also in the apex court, but if the BJP came to power, its government would push for a ban on the practice.

He said that district magistrates and police chiefs in districts would be responsible for Hindu migration due to communal tension. A special task force would be set up to check migration, he said.

The BJP also promised to fill 1.5 lakh vacancies in the police force. Mr Shah said 40,000 prisoners who had jumped parole would be arrested. He said that women police stations and an “anti-Romeo squad” would be set up. Three women battalions would also be raised.